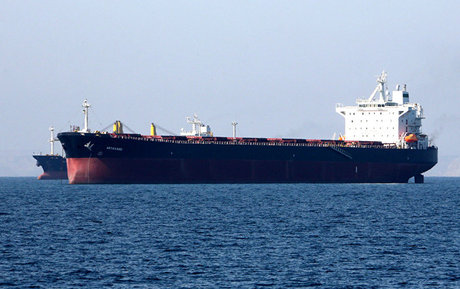 "Forty-four sailors from the two foreign oil tankers which had an accident this morning in the Sea of Oman were saved from the water by the (navy) rescue unit of Hormozgan province and transferred to the port of Bandar-e-Jask," IRNA quoted an "informed source" as saying.

The Marshall Islands-flagged tanker was carrying a load of ethanol from Qatar to Taiwan, the source said.

"As the ship caught fire, 23 of the crew jumped into the water and were saved by a passing ship and handed over to the Iranian rescue unit.

"An hour after the first accident the second ship caught fire at 9:50 am 28 miles off the port."

That Panama-flagged ship was headed to Singapore from one of Saudi Arabia's ports with a load of methanol, and 21 of its crew jumped and were rescued, said the source.

The US Fifth Fleet, based in Bahrain, said that its vessels in the Middle East had received distress calls from two tankers reportedly under attack in the Gulf of Oman.

"We are aware of the reported attack on tankers in the Gulf of Oman," it said in a statement.

"US naval forces in the region received two separate distress calls at 6:12 am. local time and a second one at 7:00 am," it said.

"US Navy ships are in the area and are rendering assistance."