Gemayel 'Not Afraid to Sleep in Chouf', Slams 'Sectarian Slogans' 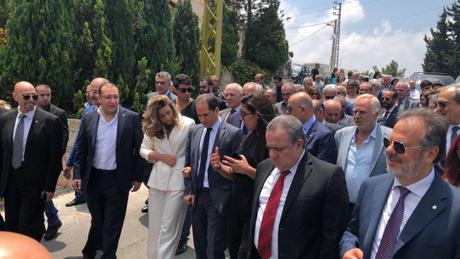 Kataeb Party chief MP Sami Gemayel on Sunday stressed the importance of the Christian-Druze reconciliation during a visit to the Chouf region, as he blasted the rhetoric of the Free Patriotic Movement -- albeit without naming it.

“I welcome MP Bilal Abdullah among us today and through him I address a big salute to the pillars of the reconciliation in Mount Lebanon: (Progressive Socialist Party chief ex-MP) Walid Jumblat and (former Lebanese president and Kataeb leader) Amin Gemayel,” the young MP said during the inauguration of a new Kataeb department in the coastal Chouf town of Rmeileh.

“To anyone who says that they’re afraid to sleep in Chouf, we tell them that we’re not afraid,” Gemayel added, in a jab at Minister of the Displaced Ghassan Atallah, who belong to the FPM.

During a TV interview, Atallah had quoted some Christians as saying that they are “afraid to sleep in Chouf.”

“We do not fear coexistence or extending our hands for cooperation for the sake of Lebanon… And certainly we are not afraid of our neighbors or town residents,” Gemayel added.

Warning that some parties are using “sectarian slogans” to “justify all kinds of violations and failure in running the country,” Gemayel urged an end to the attempts to “divide the Lebanese” and what he called “overbidding in the Christian arena.”

“I’m speaking in my capacity as the leader of the Kataeb Party, which offered 6,000 martyrs and defended Christian presence in Lebanon,” he added.

“Rest assured that had Christians been the ones aggrieved today, you would have seen us at the forefront of those defending them, but those aggrieved today are the state, the decent citizens, the law and the respect for the system,” Gemayel went on to say.

Maybe if they would stop talking about reconciliation, people would actually live normal lives. the conflict is only in these politicians' heads... not regular people.

In a normal life, many politicians are to be considered irrelevant. Hence the need to keep the potato of reconciliation warm...

They’re a bunch sleazy manipulators leading their herd to the slaughter house. Ya 7aram el shoom.

Sectarianism and reconciliation are the way the politicians control the sheep