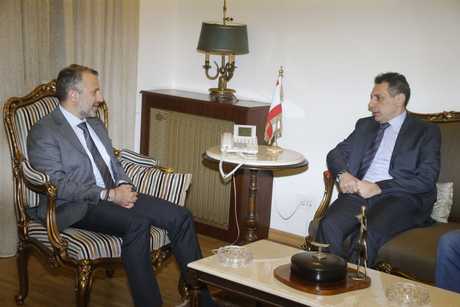 Lebanese national and U.S. green card holder Nizar Zakka, who has been recently freed from Iranian prisons, on Monday lauded the Lebanese state for securing his release.

“The credit goes to the Lebanese state, which has proven that it is truly strong and that it preserves the right of every Lebanese,” Zakka said after meeting Foreign Minister Jebran Bassil in Ashrafieh.

He also wished for “every aggrieved Lebanese” to “return to his country, regardless of his sect.”

“Lebanon is for all its sons without discrimination,” Zakka added.

Noting that he put Bassil in the picture of his detention ordeal, Zakka reiterated his "gratitude" for President Michel Aoun, Prime Minister Saad Hariri, General Security chief Maj. Gen. Abbas Ibrahim and the Lebanese embassy in Iran for the efforts they exerted to secure his release.

Asked whether he will settle in Lebanon, the freed detainee said: “What's important is that I overcome my fear of traveling in a plane.”

And as he did not rule out the possibility of writing a book about his detention ordeal, Zakka said that he is proud of his Lebanese nationality, declining to say whether he had rejected being granted the American citizenship while in prison.

Zakka, an information technology expert, was arrested in Iran in September 2015 while trying to fly out of Tehran. He had just attended a conference there at the invitation of one of the country's vice presidents. The following year, he was sentenced to 10 years in prison in a closed-door trial after authorities accused him of being an American spy — allegations he and his associates vigorously reject.

He was released Tuesday and flew back to his native Lebanon, amid heightened tensions between the U.S. and Iran.

“Lebanon is for all its sons without discrimination,” Zakka added it makes one wonder if this statement came from his namesake "zakka". He just left Iran that by the use of the quisling in Baabda wants to singular Lebanon into an Iranian Islamic state and he talks about discrimination? lol eh heda haki Zakka.....