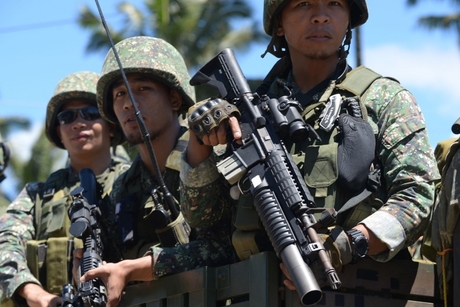 An attack on a special Philippine army counter-terrorism unit left three soldiers dead and nine others wounded in the southern Philippines on Friday, military spokesmen and witnesses told AFP.

Unknown suspects targeted the unit's temporary headquarters on the island of Jolo, a stronghold of Islamic State-linked Abu Sayyaf militants.

"It was a bomb and a firefight," army spokesman Colonel Ramon Zagala told AFP, adding the attackers' identities were not immediately known.

An AFP reporter on the scene saw a blood-soaked man slumped on a tricycle on a street also stained with blood in front of the temporary headquarters of the army's 1,500-member First Brigade Combat team.

The Philippines has renewed its campaign against the militants in Jolo this year after at least one suspected suicide bomber attacked the island's Roman Catholic cathedral, killing 21 people.

He said he could not confirm if there were civilian casualties and could not say what kind of explosives were used.

Jolo and other remote areas of the southern Philippines are home to numerous armed groups including the Abu Sayyaf, which is notorious for kidnappings and bombings.

The militants, who demand large ransoms and have beheaded several hostages, have pledged allegiance to the Islamic State.

The army deployed the specially trained unit in the Jolo town of Indanan four weeks ago.

In the same week, a Dutch birdwatcher held for years by the Abu Sayyaf was killed in Jolo during a firefight between his kidnappers and soldiers sent to rescue him.