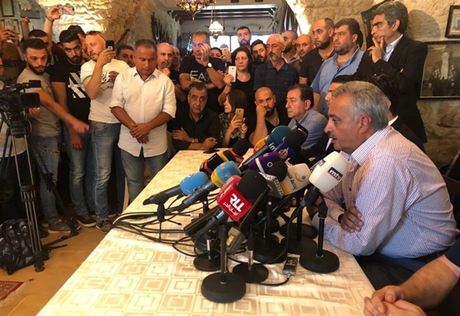 Lebanese Democratic Party leader MP Talal Arslan on Monday described the deadly clash in the Aley town of Qabrshmoun as a “premeditated sedition,” as he lashed out at Education Minister and Aley MP Akram Shehayyeb of the Progressive Socialist Party.

“The two martyrs Rami Salman and Samer Abu Farraj are the victims of a premeditated sedition that was incited two days in advance and the instigator is the sedition MP who sits around the Cabinet table and does not respect the simplest rules of coexistence, citizens' safety and the safety of his people. He is a vampire!” Arslan said, referring to Shehayyeb without naming him.

Salman and Abu Farraj were killed and a third bodyguard of State Minister for Refugee Affairs was wounded as their convoy came under gunfire in a clash with PSP supporters in Qabrshmoun. The minister escaped unharmed.

“What happened yesterday reminds us of the incidents that Choueifat witnessed a year ago, when the instigator was the same person,” Arslan added.

“These thugs and bandits do not have the ability to tolerate the other opinion,” Arslan lamented, saying “the big question is whether Mount Lebanon is within or outside the state's rule.”

He also warned that his party and supporters will take things into their own hands if the state does not act, calling for referring the case to the Judicial Council.

Arslan later entered into a meeting with President Michel Aoun at the Baabda Palace.

Arslan lamented, saying “the big question is whether Mount Lebanon is within or outside the state's rule.”

But the @POS traitor does not ask "the big question is whether Dahieh is within or outside the state's rule.”

The only people who murder Lebanese politicians are the Syrian officials.

This wasn’t an assassination attempt. The Jumblattists returned fire because the “bodyguards” which happen to be thugs with a licence to kill opened fire because roads were blocked.

This raises two questions, a) why do partisans own machine guns. b) why do bodyguards open fire when a road is blocked ?

We all saw the videos! Gharib thugs opened fire like lunatics on civilians who were demonstrating in the streets. Then they got hammered with bullets and were killed.

What is lowlife talking about?

Exactly jnoubi the videos are all over the Internet with Gharebs body guard thugs firing indiscriminately in the air to prove they are what tough or just irresponsible? The story being unfolded is that Ghareb was on his way to get Imbecile into his car so he could take him anywhere he could add division and hatred, this plan appears to have been read by his opposition and he was stopped. Plan failed and Syria will not be too happy so sadly we will have to expect a bomb or assassination somewhere soon. Oh yeah and so we all know its Israel who did it.....

He’s not even elected as MP.
No more than a Sextoy for Assad and kizballah.