Strong Lebanon to PSP: State to Have Upper Hand in Crisis 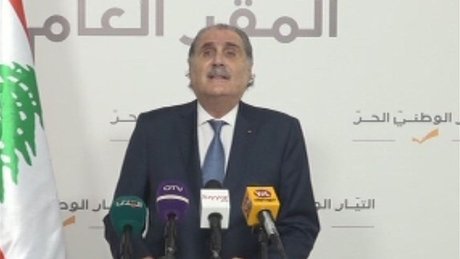 The Free Patriotic Movement-led Strong Lebanon bloc on Tuesday lashed out at the Progressive Socialist Party, saying the “sobbing” of some of its ministers and MPs “will not deceive anyone.”

“It will not prevent the State from having the upper hand in all of the crisis' junctures,” said the bloc in a statement issued after its weekly meeting, referring to the political crisis sparked by the deadly Qabrshmoun incident.

As for the controversial issue of referring the case to the Judicial Council, the bloc said the decision should be taken by Cabinet, noting that the incident had “endangered the life of a minister.”

In another jab at the PSP, the bloc said the 2018 electoral law that was based on proportional representation has “dissolved the exclusiveness of the regions,” stressing that “regional and sectarian protectorates contradict with the project of the State.”

Two bodyguards of State Minister for Refugee Affairs Saleh al-Gharib -- an FPM ally -- were killed and a third was wounded in a clash with PSP supporters in Qabrshmoun. The minister escaped unharmed as a PSP supporter was injured.

The two parties have traded blame over the incident, with Gharib and his Lebanese Democratic Party describing it as an ambush and an assassination attempt and the PSP accusing the minister's bodyguards of forcing their way and opening fire on protesters.

The protesters were blocking roads to prevent FPM chief MP Jebran Bassil from touring the region.

The LDP and its allies have insisted that the case should be referred to the Judicial Council, a demand that has been so far rejected by other political forces.

When will the state have the upper hand in the 140 illegal border crossings run by hezbollah?

Strong Lebanon? How and where can this lowlife tell us.....