Hariri Says Won't Convene Cabinet 'before Everyone Calms Down' 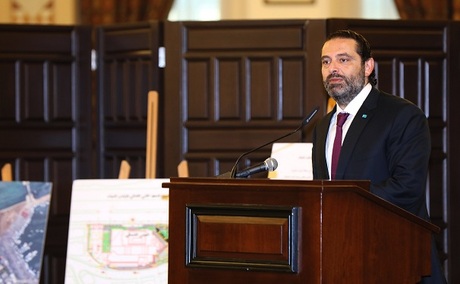 Prime Minister Saad Hariri on Tuesday announced that he will not call for a cabinet session “before everyone calms down.”

“Let them calm down for the sake of the people and the country,” Hariri said.

“I'm full of optimism despite all the pessimistic atmosphere you are witnessing, but I believe that it is a passing summer's cloud,” the premier reassured, referring to the political crisis sparked by the deadly Qabrshmoun incident.

“Unfortunately there are social, economic and humanitarian issues that we have to address whereas we are wasting time on political matters,” he said.

Two bodyguards of State Minister for Refugee Affairs Saleh al-Gharib were killed and a third was wounded in a clash with Progressive Socialist Party supporters in Qabrshmoun. The minister escaped unharmed as a PSP supporter was injured.

The two parties have traded blame over the incident, with Gharib and his Lebanese Democratic Party describing it as an ambush and an assassination attempt and the PSP accusing the minister's bodyguards of forcing their way and opening fire on protesters.

The LDP and its allies have insisted that the case should be referred to the Judicial Council, a demand that has been so far rejected by other political forces.

Hariri said he adjourned a cabinet session in the wake of the incident in order to avert a political clash over the incident.

A government and a country run according to moods!

Do your job and call for a cabinet meeting to address people's needs Mr. incompetent!

It would be good to see the end of this failed government thats for sure Rabiosa, sadly though just look around and one will quickly realize that they would simply reshuffle the same set of cards and the same jokers will be put forward for different roles....Nothing will change while Syria and Iran continue their reign over Lebanon.