Report: Venezuela Denies One of Its Ministers is Linked to Hizbullah 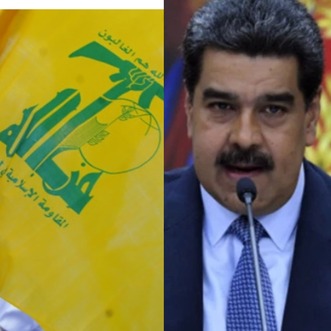 Venezuelan President Nicolas Maduro denied the US accusations that one of his ministers is linked to Hizbullah party, media reports said on Saturday.

Maduro came out Friday in defense of his minister Tareck el-Aissami, targeted by Washington and "traitors" of his government, who link him to Hizbullah, reports said.

In a reported public address attended by el-Aissami, Maduro assured that the US government "spent its time attacking" his Minister of Industry "because he is the son of an Arab couple ( ...), (and that he is) from a family partly from Syria and partly from Lebanon.”

“They want to bind him to Hizbullah, I know Tareck very well, I know him very well, never in his life has he had contact with anyone in Hizbullah," said the head of the socialist state.

Washington considers Hizbullah a “terrorist organization” and on Tuesday has announced fresh sanctions against elected Hizbullah officials for the first time.

Must be because the U.S administration is trying to open channels of communications with Hezbollah:)

Nasrallah: The Trump administration is seeking channels of communication with Hizbullah.
http://www.naharnet.com/stories/en/262581-nasrallah-stands-by-arslan-says-u-s-seeking-communication-with-hizbullah

Who’d believe a bus driver? Well, the simple minded and naive people, but no credible people would !