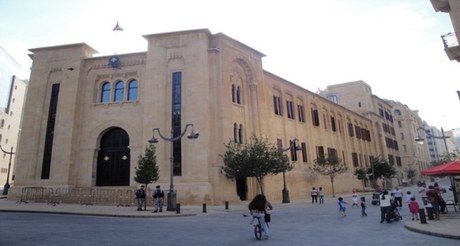 The Parliament convened for the second day in a row on Wednesday to discuss the 2019 state budget that aims to avert a financial crisis in the heavily indebted country by raising taxes and cutting public spending.

The discussions were being held amid limited protests against proposed austerity measures.

Legislators are scheduled to hold successive morning and evening sessions until Thursday.

Tuesday’s talks focused on the legal and constitutional obligation to endorse the closure of 2018 accounts that had not been completed.

MP Paula Yaacoubian, of the opposition, was the first to deliver her speech and criticized the government. She said: “I urge the government members who want to vote against the budget, to resign from the executive authority because as opponents of the budget within the government they are misleading the Lebanese.”

The MP said that “she cannot vote in favor with the suggested Budget. I hope that we would draft a better one next year.”

In his speech, MP Farid el-Bustani praised the “work” of the Finance and Budget Parliamentary Committee, but criticized the budget plan saying: “It is not a budget of reform. If we want a real budget, we have to think of a real economic advancement.”

"I give my vote to the budget not out of satisfaction, but as a necessary call for serious discussion of the plan to achieve advancement and growth," Bustani concluded.

MP Inaya Ezzedine said the budget "did not carry an economic plan" for the good management of resources and potentials of the Lebanese people, “we hope the next budget would include an operational plan to combat corruption,” she said.

MP Ziad Hawat of the Strong Republic bloc said: “The budget we are discussing today is incapable of saving Lebanon from its economic and financial crisis. We are in front of a government that failed to abide by the simple financial and legal obligations. How can you explain the fact that the budget is being discussed in the seventh month of the year?”

The proposed budget aims to reduce the projected deficit to 7.6% of the gross domestic product, from 11.5% last year. The country's public debt is 150% of the GDP, among the largest in the world, and there have been serious concerns about an economic crash.

The budget was approved by the government in late May and is expected to pass in parliament later this week. However, critics say the proposed measures fail to introduce serious structural reforms needed to rescue the flagging economy. Civil servants have been protesting for weeks, fearing the measures to be adopted would lead to wage cuts for state employees.

MP George Oqeis of the Lebanese Forces said his part is “not obliged” to vote in favor of a budget that “does not include final accounts, comes outside the legal timeframe, includes unrelated articles, lacks the principle of comprehensiveness and does not reflect a clear policy that answers all questions.”

MP Osama Saad meanwhile said the proposed budget does not rise to the level of challenges facing Lebanon.

“The government is searching in the pockets of the poor,” he lamented.

“Why don’t you take your austerity budget and leave with it, seeing as it is biased against the productive and innovative individuals and it belongs to the coalition of money, politics and power,” Saad added, accusing authorities to seeking to “buy time.”

Yes it's clear those corrupt individuals are seeking to buy time bcuz some of them (Hariri and co.) are in desperate need of CEDRE funds to get them pockets filled. After that they honestly don't care for what happens to Lebanon, they are trying to save their own families from misery, they all have foreign Citizenship granted, when the national boat sinks they know where to go!

Just Harriri and Co Libres? try every single member of the government including government employees too. They do not care one iota about the country but their individual wellfare.