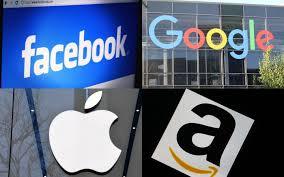 France on Wednesday expressed defiance in a row with the United States over taxing tech giants that threatens to dominate a G7 meeting, saying an international accord was the only way to solve the dispute.

French Finance Minister Bruno Le Maire was set to meet Treasury Secretary Steven Mnuchin on the sidelines of the meeting of finance ministers from the world's seven most developed economies in Chantilly outside Paris. But there was no early sign of any compromise.

The French parliament earlier this month passed a new law that will tax digital giants on revenue accrued inside the country, even if their European headquarters are elsewhere, in a move that will affect U.S. groups Google, Apple, Facebook and Amazon.

The move infuriated the United States which announced an unprecedented probe against France which could trigger the imposition of tariffs.

"It is going to be difficult, I know. The American position has hardened recently," said Le Maire ahead of his meeting with Mnuchin, which was pushed back due to the US official's delayed flight.

Le Maire said he would make clear that the French parliament had agreed the tax and this could only be withdrawn if there was an international agreement.

In comments to France Inter radio, Le Maire said France would not back down with its plans to impose a three-percent tax on revenue that tech firms earn from French sales, despite the threat of U.S. retaliation.

"The possibility of US sanctions against France exists," Le Maire said. "There is a legal instrument for that and clearly there is the political will."

Even before the final vote by French lawmakers, the U.S. announced it was opening a so-called Section 301 investigation into the measure.

A Section 301 investigation was used by the Trump administration to justify tariffs on China.

But Le Maire said: "France will not back down on the introduction of its national tax. It was decided upon, it was voted upon, it will be applied from 2019."

The minister had late Tuesday expressed confidence that the G7 could find a consensus for an international accord which would be overseen by the Organisation for Economic Cooperation and Development (OECD).

"This would be the best way to solve this problem," said Le Maire.

Britain unveiled legislation last week and Spain said Wednesday it would move forward once a new government is in place.

But smaller EU states such as Ireland and Luxemburg -- low-tax countries which host the European headquarters of digital giants -- have prevented a consensus in the EU.

While the measure does not specifically target U.S. internet giants, the French commonly call it the GAFA tax, an acronym for Google, Amazon, Facebook and Apple.

Work has been under way for several years on a reform of the international tax system to ensure that multinationals are not able to escape paying taxes in countries where they do large amounts of their business.

A number of other thorny issues await G7 ministers when they begin their meeting against a mixed global economic picture.

Plans by Facebook to launch a virtual currency called Libra have stoked concerns among regulators in numerous countries about regulation and market oversight of cryptocurrencies.

"We'll reiterate our intention not to allow a private company to acquire the elements of monetary sovereignty," a French official told AFP last week on condition of anonymity.

Le Maire has publicly voiced his concerns about Libra, a virtual currency to be backed with a basket of real-world currencies that Facebook says will facilitate online financial transactions.

"The conditions are not yet in place today for Libra to be introduced," Le Maire said Wednesday before meeting Mnuchin, adding that a regulatory framework was needed.

The ministers are also expected to discuss who will take over at the International Monetary Fund after Frenchwoman Christine Lagarde was named to head the European Central Bank. The IMF post has traditionally been held by a European.