Iranian Official: Lebanon Must Steer Clear of All Crises in the Region 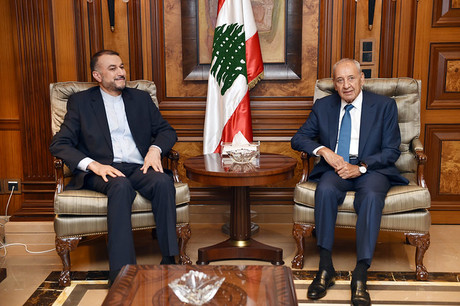 An Iranian official announced Wednesday after talks with Speaker Nabih Berri that Lebanon “must steer clear of all crises in the region.”

“We held a round of good and constructive talks with Lebanese Parliament Speaker Mr. Nabih Berri and we came here today to reiterate anew that Iran strongly backs the sons of the Lebanese people and the army, resistance and government,” Hossein Amir-Abdollahian, the international affairs aide of Iran’s parliament speaker, said after meeting Berri in Beirut.

“We are looking forward to developing the ties between the two countries on the highest levels, and the Iranian republic stresses the need for Lebanon to steer clear of all crises in the region and we are confident that security in Lebanon is security for the region and the Islamic Republic of Iran,” the Iranian official added.

“We loudly say that Iran and its allies will not allow the Zionist entity (Israel) and America to manipulate the region’s security,” Abdollahian went on to say.

Iran's Lebanese ally Hizbullah has sent thousands of fighters into neighboring Syria to bolster President Bashar al-Assad's regime in the face of an Islamist-led uprising.

Hizbullah has also acknowledged sending military advisers to Iraq and is accused of meddling in the affairs of a number of Arab countries such as Yemen, Bahrain and Kuwait.

An Iranian official announced Wednesday after talks with Speaker Nabih Berri that Lebanon “must steer clear of all crises in the region.”

so why does he send his proxies, the shia terror militia of hezbollah, to kill in Syria, Iraq and Yemen?

I am wondering how these guys believe their own bs when their own puppet in the region said something different a few days ago. What does hassoun think about this?

Words of wisdom from the Iranian terrorist....

"Dont rock the boat. We want to keep Lebanon as a safe haven for shia-militia."

Lebanon is what it is because of the Lebanese themselves. They have no sense of pride, dignity, or sense of citizenship. They are unable to govern and build a fair state without being proxies to foreign countries. They are corrupt by nature, selfish, racist, and are loyal only to the highest bidder.

Steering clear of one crisis in the region could be simply achieved by talking directly with the Israelis regarding the sea border.
Once both sides have proved that they can talk to each other on this subject then they will find that, believe it or not, they can discuss other common matters, without external (UN, US etc) interference.