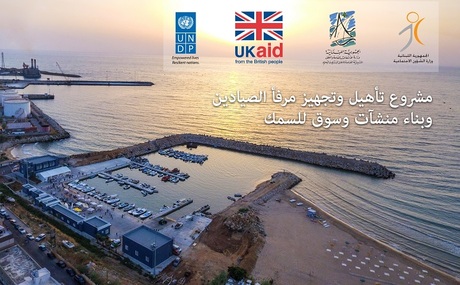 “When the impossible becomes possible… Through this project, I am now able to support my family and give them a better life,” said fisherman Wafic El Sabra.

72 fishermen are now able to work at sea fully equipped, sell their daily catch, and generate income to support their families and, more widely, Lebanon’s economy thanks to UK aid funding within the framework of the Lebanon Host Communities Support Program (LHSP), by UNDP in partnership with the Ministry of Social Affairs (MoSA). This project was implemented in collaboration with the Ministry of Public Works and Transport (MoPWT).

On July 16, the inauguration of the rehabilitation of the Jiyeh port took place in the presence of Minister of Social Affairs Richard Kouyoumjian, Ambassador of the United Kingdom to Lebanon Chris Rampling, Ambassador of Sweden to Lebanon Jörgen Lindström, UNDP Resident Representative Celine Moyroud, Director General of the Ministry of Public Works and Transport Abdul Hafiz Qaissi, Head of the Union of North Iqlim al-Kharroub Municipalities Ziad al-Hajjar, members of the Fishermen’s Cooperative Association in the Chouf Coast, and numerous stakeholders from the area.

The rehabilitation of the Jiyeh port and the construction of a fish market and surrounding facilities transformed it into one of “the most reliable fishermen ports across the country with high standard safety measures, tools, and equipment,” the British embassy said in a statement.

Today the facility – completed in coordination with the Ministry of Public Works and Transport to ensure that works fall in accordance with the ministry’s port standards - includes an increased number of boat parking spaces and a 200 m2 fish market, as well as fully equipped cooperative rooms serving 72 fishermen.

The Fishermen’s Cooperative board members were also supported with a personalized and specialized capacity building program for operations and management skills to complement the project’s provisions.

At the end of the event, Minister Koyoumjian said: "I am happy that the local communities are involved in the implemented projects and identify their needs, and the Ministry of Social Affairs helps municipalities with planning and guidance." He urged municipalities and the cooperative to maintain and further develop the project.

British Ambassador Chris Rampling addressed the sailors with ‘3indak bahriya ya rayes’ (Do you have sailors, boss?) and said: “It’s great to be here today to inaugurate the Jiyeh port. This is yet another demonstration of the UK’s strong relationship with Lebanon in support of its economy and prosperity. It’s always heart-warming to see the positive impact these projects are having on people’s lives.”

“This facility is now able to support over 65,831 direct and indirect beneficiaries through one of Lebanon’s best equipped ports across the country. The UK was one of the first donors to support LHSP through our partnership with MoSA and UNDP. We are always proud of this partnership that is allowing tens of thousands of the most vulnerable across Lebanon to benefit from this program,” he added.

UNDP Representative Moyroud said: “The local community has expressed, through an integrated approach, their needs concerning the necessity to improve job creation and revitalize the local economy. This is a crucial issue in the response to the impact of the crisis in the country.”

The word from the fishermen was delivered by the head of the Fishermen’s Cooperative Association in the Chouf Coast, Mohammed Kojok, who said: “Our patience has been rewarded and hope remains for the fishermen of Jiyeh. The sea favors the steadfast, and today’s project is a realization of a dream which started in 2003, and then funded by the UK in 2017 through LHSP that provided fishing equipment and boats to the Fishermen’s Cooperative Association in the Chouf Coast. We can now go fishing in the morning and sell our products in the evening without fear or worry about our equipment, our safety and daily bread.”

Through a close partnership between UNDP, the Ministry of Social Affairs, line ministries, and municipalities, LHSP has implemented since 2014, with the support of a pool of international donors, over 566 projects in 192 most vulnerable municipalities and 11 unions of municipalities, benefitting more than 1.5 million Lebanese and 500,000 Syrians.

In the Mount Lebanon Governorate alone, UK aid has funded LHSP’s projects with over $4.3 million, supporting more than 300,000 beneficiaries. Projects targeted for UK support are identified directly by the relevant municipalities and local communities in response to their most urgent needs.

Next to the fatmagül powership scam.... lovely odors and above all, lovely heavy fuel polluting the sea.