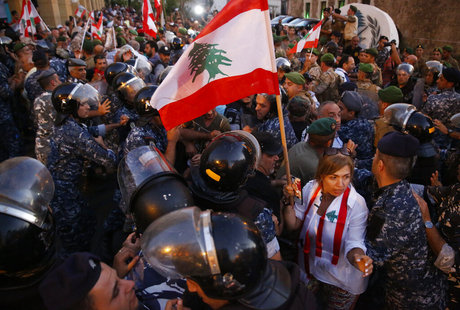 The budget was passed with 83 votes in favor, 17 against and one abstention.

Speaking after the bill was approved, Prime Minister Saad Hariri said "reforms need an effort" and that he understands "protesters' demands."

"But we are trying to do the impossible in a difficult situation," he added.

Hoping the 2020 budget will be passed within the constitutional timeframe, Hariri said that had it not been for the political settlement that led to President Michel Aoun's election, there would not have been an electoral law nor a state budget.

As for the political crisis over the Qabrshmoun incident, Hariri said the standoff can be resolved through the "wisdom" of Progressive Socialist Party leader Walid Jumblat, Lebanese Democratic Party chief Talal Arslan and all the parties.

Protesters rallying against the austerity budget had earlier in the day stormed a security cordon outside parliament.

The protesters, mostly army veterans, pushed past barricades, walking over them and making their way closer to the heavily guarded parliament building. Some protesters scuffled with security forces but soldiers were deployed to separate between them. The protesters had gathered every day since Tuesday as lawmakers met for final discussion on the budget ahead of a vote.

Speaker Nabih Berri stressed during the session that "no one can storm parliament," noting that he had communicated with the Army Command which told him that it will "take the necessary measures."

"They could solve this issue (the deficit) by looking at rented property; they can solve it by looking at coastal properties," protester Fadi Abdullah told The Associated Press, referring to raising and collecting taxes on expensive real estate. "We cannot stay silent and pay for their mistakes. They should do drastic reforms. Everything that's in the interest of the army they don't do. They do the opposite."

A "settlement" was later reached between lawmakers and the veterans after which the protests abated and a protest tent was removed.

Under the settlement, parliament approved a state budget article imposing an income tax on the retired servicemen as per the latest text that was devised by the finance parliamentary committee.

A spokesman for the retirees, Brig. Gen. George Nader, said the veterans are still rejecting the cuts included in the budget but have decided to file an appeal before the Constitutional Court.

"The rights of those who have disabilities and the families of martyrs will not be touched," Nader said, after meeting a number of officials during the parliamentary session.

Defense Minister Elias Bou Saab later said that only an LBP 3,000 cut will affect the salaries of retired servicemen below the rank of colonel.

The budget is aimed at averting a financial crisis in heavily indebted Lebanon. But it has been met with criticism for failing to address structural problems. Instead, the budget mostly cuts public spending and raises taxes.

The budget can easily be fixed by holding all of the current and past ministers accountable for the funding they stole from the treasury. In order for that to happen the sheep have to wake up and don't fall for the sectarian BS the leaders feed them. As we all know that will never happen in the so called Banana Republic of Lebanon...

Now we know what to do, demonstrate and brake barriers and the government will back off.

The yellow vests in France tried a similar approach but it didn’t work... because the government is legitimate unlike Lebanon’s association of mafiosi and war criminals.