Drone Bombs Base Used by Pro-Iran Forces in Iraq 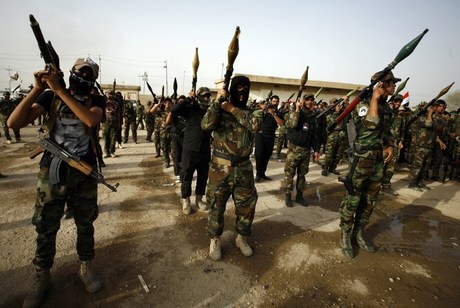 An unmanned drone bombed a base used by pro-Tehran paramilitary units in central Iraq, the country's military announced Friday, with sources saying one fighter was killed and two Iranians wounded.

The U.S. immediately denied involvement in the attack, which took place overnight between Thursday and Friday in an ethnically and religiously mixed area north of Baghdad.

It comes as Iraq struggles to keep rising tensions between Iran and the United States -- arch-rivals but both allies of Baghdad -- from spilling over onto its soil.

"The Al-Shuhada base of the Hashed al-Shaabi in the Amerli region was hit at dawn... by an unidentified drone, wounding two people," the Iraqi military said in a statement on Friday.

But an official from the Hashed al-Shaabi, a network of Iraqi paramilitary units dominated by pro-Iran Shiite forces, and a police officer both gave a toll of one Iraqi fighter dead and two people wounded.

The police source, who visited the site of the attack, said the two wounded were "Iranian military engineers."

Pentagon spokesman Sean Robertson said "U.S. forces were not involved" in the attack.

The second attack hit a weapons depot, causing a large fire at the base. The official spoke on condition of anonymity to disclose sensitive information.

An Iraqi official said IS militants were most likely behind the attack, ruling out a U.S.-led coalition or American attack. He spoke on condition of anonymity in line with regulations.

Iran says it does not have forces officially deployed in Iraq, but observers say Iranian advisers regularly train Iraqi forces, including the Hashed.

The Hashed is largely opposed to the United States, which has slapped sanctions on some of its leaders for ties to Iran.

The U.S., meanwhile, has an estimated 5,200 troops based across the country in training and advisory roles.

In recent months, a string of rocket attacks have targeted bases where U.S. troops are stationed, sparking concern of a potential confrontation between the U.S. and Iran on Iraqi soil.