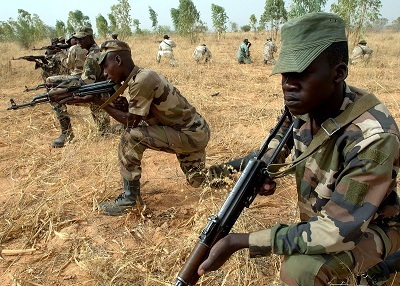 For three years government troops have been fighting English-speaking separatists demanding independence in the northwest and southwest regions, leaving hundreds dead and forcing nearly 500,000 people from their homes.

An 80-year-old man and a young man with a mental disability were among those killed in security operations since mid-June, HRW said in a statement on its website.

"Instead of seeing that justice is done, Cameroon's authorities deny that their forces are killing and raping people, so it is essential to remind them that the world is watching."

A 40-year-old woman was beaten and raped in a toilet in Kumbo on June 21 after a group of soldiers demanded to know where separatists were hiding, HRW said.

HRW says unlawful killings and the use of excessive force by government forces have been rife since the crisis started.

"Security forces seem to have little fear of what will happen as they commit brazen crimes against civilians," Mudge said.

Government forces were blamed for killing civilians, using excessive force against demonstrators, torture and the burning of homes in several villages, according to a report based on interviews and documents.

English speakers, who account for about a fifth of Cameroon's population of 24 million, have chafed for years at perceived discrimination in education, law and economic opportunities at the hands of the francophone majority.

But the government has rejected demands for autonomy and has dispatched thousands of troops in a crackdown.

The anglophone movement radicalized in 2017, with separatists declaring the creation of the "Republic of Ambazonia" -- a move which was not recognized internationally.