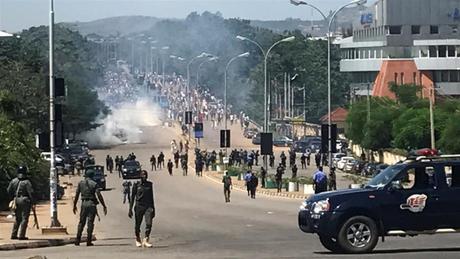 At least six Shiite Muslim protesters were killed in clashes with Nigerian police in the capital Abuja on Monday, witnesses told AFP, the latest deadly violence over the lengthy detention of a religious leader.

Hundreds of protesters from the Islamic Movement in Nigeria (IMN), a Shia sect, marched demanding the release of pro-Iranian cleric Ibrahim Zakzaky, who has been held since December 2015 on various charges, including terrorism.

Hundreds of his supporters, including women and children, were killed by the security forces, in December 2015, according to a toll established by rights watchdogs.

After witnessing the violence on Monday, a Shiite protester, Abdullahi Musa, said: "I am right now in front of six dead bodies, one of them is an underage boy."

"Many, many people were shot."

An AFP journalist said he saw police open fire with live ammunition as well as tear gas, while protesters threw petrol bombs at the officers.

"I saw six people dead in different places, one of them was a teenager," the journalist said.

A senior police officer was also killed in the violence, according to local reports, which the journalist verified.

The IMN have held almost daily marches in the capital in recent months amid concerns Zakzaky's health is deteriorating.

Zakzaky remains in government custody despite the federal high court ordering his release.

The government has refused and filed fresh criminal charges, including culpable homicide that is "punishable with death".

The move has enraged his supporters who say Zakzaky is in urgent need of medical treatment being denied by the authorities.

Police on Monday described the clashes as "a violent protest" but gave no casualty figures.

Amnesty International condemned the police action as a "reckless use of force".

"This new crackdown is part of a shocking pattern in which security forces have used live ammunition to disperse IMN supporters who are simply exercising their freedom of expression," the rights group said.

Nigerian broadcast company Channels TV said one of its journalists was hit by a stray bullet.

Zakzaky has been at loggerheads with Nigeria's secular authorities for years because of his call for an Iranian-style Islamic revolution.

He was detained after violence during a religious procession in Kaduna State, northern Nigeria in December 2015.

Rights groups say some 350 mostly unarmed Shiite marchers were killed by the Nigerian army and buried in mass graves.

The military denies the claim.

Since then, several protest marches by IMN supporters have led to violence with the police.

In October 2018, the IMN and human rights groups said, more than 40 people were killed when the security forces opened fire on crowds on the outskirts of the capital. The official toll is six.

After a rare visit by medical staff, the IMN said Zakzaky was suffering from a number of conditions including lead poisoning, high blood pressure, and glaucoma which can lead to partial blindness.

Zakzaky's wife, Zeenah Ibrahim, has also been detained since 2015. She had an un-treated bullet wound, medical staff said.

Their son Mohammed Zakzaky earlier this month said it was a miracle they were still alive.

"It appears that there is a deliberate attempt to assassinate my parents through deliberate negligence towards their health," he said.

A spokesperson for President Muhammadu Buhari last week called for an end to the IMN's protests which "openly insult the President."

The IMN said they would continue demonstrating as past court orders for Zakzaky's release had been ignored.

"This government deliberately intends to provoke the movement into violence," said IMN spokesperson Ibrahim Musa in a statement.

The IMN, which emerged as a student movement in the late 1970s, was inspired by the Islamic revolution in Iran.

The sect is met with hostility in Nigeria, where the Sunni elite are allied with Saudi Arabia.

Décidément ! It looks like we’re facing a new NGO known as TWB, Terrorists Without Borders ... iran must go down quickly before it destabilizes more countries with the poison it distillates .

"Zakzaky has been at loggerheads with Nigeria's secular authorities for years because of his call for an Iranian-style Islamic revolution."

He then deserves to die.