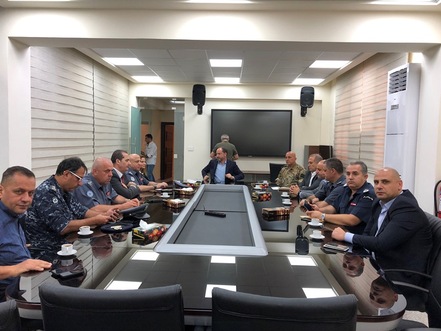 Palestinians refugees in the southern camp of Ain el-Hilweh are on an ongoing strike in protest against Lebanon's labour ministry cracking down on businesses employing foreign workers without a permit, media reports said on Thursday.

The National News Agency said the sub-security council of the South held a meeting at Sidon’s Grand Serail under the chairmanship of the Governor of the South, Mansour Daou and in the presence of leaders of judicial, military and security agencies to discuss the situation in Sidon in light of aggravating protests.

Palestinian refugees protested last week in the streets of Beirut and in refugees camps, as well as the south and east of the country, against the labour ministry cracking down on businesses employing foreign workers without a permit.

So, they are on strike. Exactly who is it affecting? Only those inside the camp, i.e. themselves.
Therefore, let them continue.

Israel must integrate them if it wishes to survive on the long term. It took 2 centuries to expel the European invaders during the crusades. The situation was very similar, at times they were at war with neighboring Arabs, but at times they were also at peace. Israel may be improving its relations with the gulf nations, how long do you think this will last if the Palestinians aren’t integrated in the Israeli society with equal rights ? Eventually, the gulf rulers will be toppled, its only a matter of time actually. Playing the time card is a short term victory....

People who are third generation born-in-Lebanon have reasonable arguments that they should be allowed to seek employment.