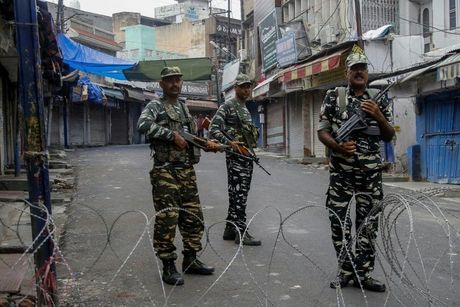 Indian forces across Kashmir were on alert to head off protests after Friday prayers at mosques, as tensions remained high over the ending of the disputed region's autonomy, residents and reports said.

A five-day-old lockdown with no internet or phone communications appeared tighter than ever though the region's police chief told AFP the curfew would be eased so the Muslim-majority population could pray.

Dilbag Singh, Kashmir director general of police, said people could go to mosques "within their neighborhood" but added: "They should not venture out of their local area."

The giant Jama Masjid mosque in Srinagar -- a longtime focus for separatist protests -- remained closed as the government sought to keep a lid on unrest after it cancelled the constitutionally guaranteed privileges of the former Himalayan kingdom, residents told AFP.

Protests against Indian rule have frequently broken out in Srinagar's old quarter after weekly prayers at the mosque, which can hold more than 30,000 worshipers.

"It's tense," one resident said after going near the mosque. "There are troops everywhere."

Tens of thousands of extra Indian troops were sent to enforce the clampdown imposed ahead of Monday's presidential decree to tighten central control on the region that is also claimed by Pakistan.

The reinforcements and the 500,000 troops already in Kashmir fighting a three-decade-old insurgency were put on "high alert" for trouble around Friday prayers, the Press Trust of India news agency reported from Srinagar, quoting a security official.

"There is apprehension of mass protests and accordingly necessary steps were taken," the official added.

Despite the huge security presence, sporadic protests have been reported in recent days in Srinagar and the Ladakh region which the government has split away from Jammu and Kashmir under the new measures.

Police have chased groups of pro-separatist demonstrators in Srinagar, many of whom gather at night, residents said. One youth died this week after jumping in a river to escape security forces, according to police.

Pakistan has strongly condemned New Delhi's action in Kashmir. On Friday, some 3,000 protesters marched in Islamabad, chanting slogans against the move, such as "Kashmir will become Pakistan."

While Pakistan has expelled the Indian ambassador and suspended bilateral trade, Qureshi has said his country would not seek a new conflict with its neighbor.

China, which also controls a sector of Kashmir, protested this week after India reaffirmed its claim to China's territory on a Himalayan plateau.

India's Foreign Minister Subrahmanyam Jaishankar is to visit Beijing from Sunday for talks with Wang.

Friday prayers were the start of a crucial test of New Delhi's ability to enforce the decision by Modi's Hindu nationalist government. The major Muslim festival of Eid al-Adha is on Monday.

Modi said in a nationwide address on Thursday that people will "not face difficulties" celebrating Eid.

Media reports said, however, that authorities would only decide on curfew restrictions on Sunday.

In his speech, Modi strongly defended his intervention in Kashmir.

The right-wing prime minister called it a "historic decision" and added: "I have full belief that we will be able to free Jammu and Kashmir from terrorism and separatism under this (new) system."

He accused Pakistan of taking advantage of the region's special status to stir troubles there.

India and Pakistan split Kashmir after their independence and angry division in 1947. They fought two of their three wars over the former princely state.