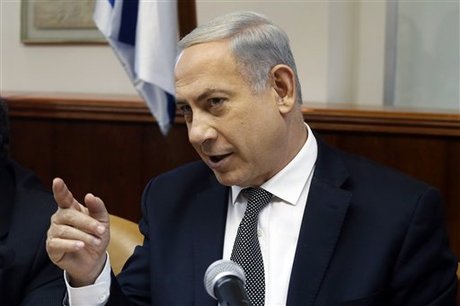 Israeli Prime Minister Benjamin Netanyahu said he was "unimpressed" by a speech from Hizbullah chief Sayyed Hassan Nasrallah in which the Lebanese group's leader warned of his movement's military strength.

Nasrallah spoke in a TV broadcast Friday marking the anniversary of a 2006 war between Hizbullah and Israel.

A month of fighting killed more than 1,200 Lebanese, mostly civilians, and more than 160 Israelis, mostly soldiers.

Nasrallah said that the 2006 war had helped Hizbullah develop "a military system to defend our villages, towns and cities."

"If (Israel) enters southern Lebanon... you will see a live broadcast of the destruction of Israeli brigades," he warned.

Netanyahu responded saying, "We are not impressed by Nasrallah's threats."

"He knows very well why he broadcasts them from the depths of his bunker," he said in a statement on WhatsApp.

Nasrallah is rarely seen in public.

In a 2014 interview with Lebanon's al-Akhbar newspaper, he said that he regularly switched sleeping places, particularly since the 2006 war, but denied that he lived in hiding.

"I don't live in a bunker," he said. "The point of security measures is that movement be kept secret, but that doesn't stop me from moving around and seeing what is happening."

For israhell to use its nukes so close to its borders is suicide.
The israhellis are also cowards and will hide when ever they see a person under occupation. Just look at how they run when palestinian kids throw stones at them

Now let me get this right. Nasrallah has been stuck in his underground bunker for over 10 years and you call Israel cowards.
Nobody has said that Israel would use (or even need to use) nuclear weapons on Lebanon. If Hizballah goes too far it will only need conventional weapons to put an end to them.
If Israelis hide when they see a person under occupation, then how on earth are they "under occupation".