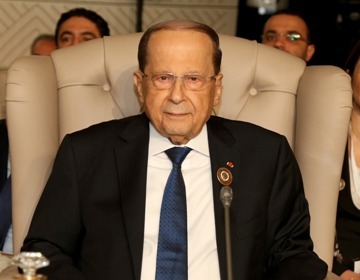 President Michel Aoun on Monday stressed that Washington has not “pressured” his political camp in connection with the recent crisis over the Qabrshmoun incident.

“The United States has not pressured us and our character does not tolerate any pressures in the first place,” Aoun told reporters in a chat at the summer presidential palace in Beiteddine.

He added: “We will overcome the crisis and, through the consultative committee, we will begin laying out executive plans for the Baabda economic paper this week.”

“We have a gradual program for reform and we will gradually implement what was requested from us at the CEDRE conference,” Aoun went on to say, noting that Lebanon cannot put some recommendations into action due to its “financial situations.”

“The Lebanese will feel gradual improvement at the economic level,” the president reassured.

“The appointments will be discussed in due time,” he said.

Separately, Aoun revealed that some politicians have asked him to pressure Free Patriotic Movement chief and Foreign Minister Jebran Bassil – his son-in-law.

“I do not pressure him, seeing as he is the head of a party and the biggest Christian bloc, but I offer him advices the same as I offer others,” the president added.

As for the recent controversy over sectarian balance in state administrations, Aoun said: “They don’t want to abolish sectarianism in jobs and they don’t want to preserve balance in employment, that’s why I have requested the interpretation of Article 95 of the Constitution” by Parliament.

Also best prime minister ever and best commander of the lebanese armed forces ever. Who are we kidding best human being ever!!