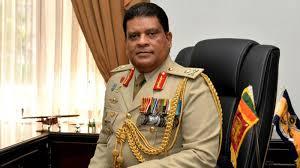 U.N. rights chief Michelle Bachelet said Monday she is "deeply troubled" by Sri Lanka's appointment of an accused war criminal as army chief, as global concern mounts over the nomination.

Major General Shavendra Silva, 55, was elevated to the army's second-highest position of chief of staff in January before his latest promotion by President Maithripala Sirisena to commander of the Sri Lankan army.

Silva, who commanded an army division in the long-running civil war with Tamil separatists, has been accused by the United Nations of war crimes during the conflict's final stages.

"I am deeply troubled by the appointment ... despite the serious allegations of gross violations of international human rights and humanitarian law against him and his troops during the war," Bachelet said.

The U.S. embassy in Colombo, along with civil society groups, have also criticized the appointment as a move likely to undermine reconciliation efforts.

Sri Lanka's armed forces crushed the separatist rebels in 2009 in a no-holds barred offensive that ended a 37-year war which killed 100,000 people.

There were mass atrocities against civilians in Sri Lanka's predominantly Tamil north towards the end of the conflict, with rights groups saying some 40,000 ethnic Tamils were killed by government forces.

Silva!!!??US support the expation of whaabi movements in Sri Lanka... Silva is a portuguêse catholic name! US only support mohameds names...

Good choice!!! Is a Good message to the catholic comunities in Sri lank

Fortunately there are more psychiatrists in New York City than in the rest of the world combined.