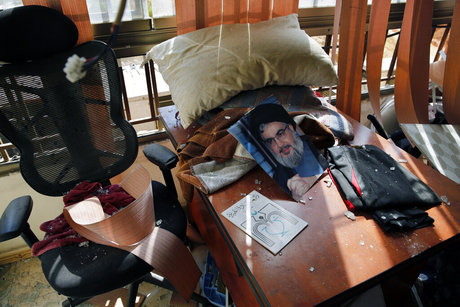 Lebanese officials, politicians and religious leaders on Sunday condemned the Israeli drone bombing in a Hizbullah stronghold in Beirut’s southern suburbs, as some of them stressed that the Lebanese state should be in charge of responding to the development.

“We strongly deplore the fall of the two Israeli aircraft over the southern suburbs and the blatant aggression against Lebanese sovereignty and Resolution 1701,” Interior Minister Raya al-Hassan tweeted.

“This pushes us to embrace the state and its legitimate institutions and security agencies in order to preserve security and stability through unified political decisions that would be in the interest of Lebanon and the Lebanese,” she added.

Progressive Socialist Party leader Walid Jumblat for his part said “the Israeli aggression heralds a major explosion” of the situations, adding that the “best way to confront the Israeli aggression” is through “national unity” and through “taking all the necessary administrative and financial measures to immunize the internal situation, as mentioned by President (Michel) Aoun yesterday.”

Marada Movement chief Suleiman Franjieh for his part said the incident is a “blatant attack on Lebanon and its sovereignty and resistance,” urging “a unified national stance and an official complaint to the U.N. Security Council.”

MP Dima Jamali of al-Mustaqbal bloc called on all political parties to “stand behind the state and its legitimate institutions and security agencies” and not to be dragged into “any act that would jeopardize security and stability.”

Pro-Hizbullah MP Jamil al-Sayyed meanwhile took a swipe at Prime Minister Saad Hariri for saying that the government will shoulder its responsibilities towards the incident.

“How will the government manage to shoulder its responsibilities towards an Israeli attack after it drowned in the teacup of Qabrshmoun’s incident?!! War with binoculars is easy,” al-Sayyed added.

Grand Mufti Sheikh Abdul Latif Daryan meanwhile called on the U.N., the Security Council and the international community to address “the Israeli enemy’s violation of Lebanese sovereignty,” urging them to “deter the Israeli enemy against launching any aggression against Lebanon.”

“Lebanon is keen on its national unity, which is the basis in confronting any Israeli aggression,” Daryan added.

The head of the Higher Islamic Shiite Council Sheikh Abdul Amir Qabalan meanwhile warned that Israel is “playing with fire.”

He also called on the U.N. and the Security Council to respond to the development.

Ex-MP Fares Soaid for his part quipped by calling on Foreign Minister Jebran Bassil to “organize a political-diplomatic tour to explain what is happening in Beirut’s southern suburbs.”