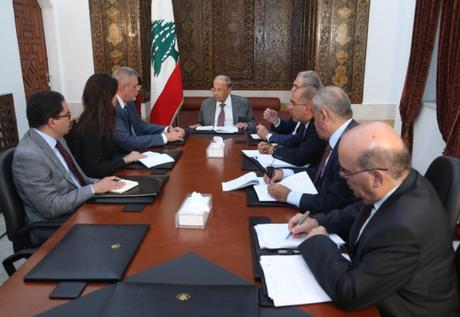 President Michel Aoun on Monday described the weekend Israeli attacks on Beirut’s southern suburbs and the eastern border region of Qusaya as a “declaration of war.”

“The attacks on Dahiyeh and the Qusaya region violate (U.N. Security Council) Resolution 1701, and its stipulations that bind Lebanon should also be binding for Israel,” Aoun told U.N. Special Coordinator for Lebanon Jan Kubis during a meeting in Beiteddine.

“What happened resembles a declaration of war that entitles us to resort to our right to defend our sovereignty, independence and territorial integrity,” Aoun added.

“We are people who seek peace, not war, but we do not accept to be threatened by anyone in any manner,” the president underlined.

"I have repeatedly said before that Lebanon will not fire a single shot from its border unless it is in self-defense," said Aoun.

"What happened yesterday allows us to exercise this right," he added.

And on Monday, the Popular Front for the Liberation of Palestine-General Command said an Israeli drone had bombed its base in the Lebanese eastern border region of Qusaya overnight.

Hizbullah chief Sayyed Hassan Nasrallah had on Sunday vowed to "do everything" to thwart future drone attacks in Lebanon. He also pledged to retaliate from Lebanon against any Israeli attack that kills Hizbullah members in Syria.

He has to call it the end of the world as Kizb is weighing in right now on all those who stay silent...

A declaration of war 2al. Then I hope he’ll personally lead the war on the battlefield unless he’s one of those.... who talks the talk but doesn’t walk the walk à la Nasrala.

He will lead the war from "under his bed" headquarters.

Who is it in Lebanon who can proclaim war on another party? I'm pretty sure that it is not the President.

and we cannot wait to see your and your iranian terror group's response to this declaration of war!