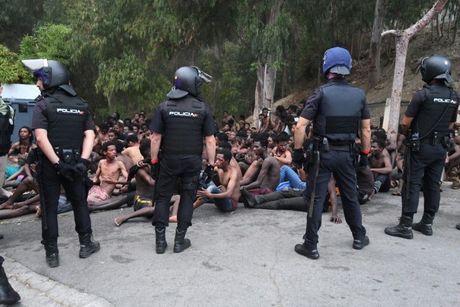 More than 150 migrants forced their way into Spain's overseas territory of Ceuta on Friday, hours after 540 people alighted in Greece as pressure on southern European states continues despite an overall drop in arrivals.

The mass arrivals come after several charity ships that rescued migrants off the coast of Libya were denied access to Italian ports by outgoing hardline interior minister Matteo Salvini.

On Friday, another such vessel belonging to charity Mediterranea Saving Humans warned of an impending health emergency on board as it was stuck at sea after being banned from entering Italian waters.

According to the latest data from the International Organization for Migration (IOM), more than 46,500 people had crossed the Mediterranean to Europe this year to August 28 and another 909 died in the attempt.

But southern European nations still bear the brunt of these arrivals.

"The countries that don't have maritime borders also need to assume shared responsibility," she told lawmakers.

In Spain's north African enclave of Ceuta early on Friday, taking advantage of misty weather, 155 migrants stormed the barbed wire border that separates it from Morocco. Some of them clambered over while others broke through a door in the fence.

"They are all from sub-Saharan Africa, the majority from Guinea," a spokesman for the central government's office in Ceuta told AFP.

Ceuta and Melilla, another Spanish enclave, represent the European Union's only lander borders with Africa.

All in all, though, the number of migrants arriving in both cities this year has dropped to just over 18 percent to 3,427 compared with 2018, according to the latest interior ministry figures.

This is the first time in a year that migrants have managed to storm the barbed wire fence in Ceuta as a group, the spokesman said.

Once on Spanish territory, they are usually taken to a migrant reception center where they can ask for asylum.

But Madrid has been known to send migrants back to Morocco.

In August last year, Spain sent back 116 migrants who had forced their way into Ceuta in a mass expulsion condemned by human rights activists.

It is as yet unclear what will happen in this case.

In Greece, meanwhile, around 540 migrants arrived Thursday evening on the island of Lesbos on board 13 boats from nearby Turkey, including 240 children.

They were transferred to the cramped Moria migrant camp where there are "nearly 11,000 people for a capacity of just 3,000," medical charity Doctors without Borders (MSF) said.

A Greek diplomatic source, who refused to be named, said Athens had informed the European Union about this "unprecedented rise" in the number of migrants.

Greece has overtaken Spain this year to become the main entry point for migrants seeking to get to Europe.

At least 23,200 people have arrived by sea so far this year, according to the IOM.

Over near Italy, Mediterranea Saving Humans said it had 34 migrants on board its ship after 64 vulnerable people it had rescued, including women and children, were disembarked on Thursday.

It said it had sent a "new urgent request" for a safe port after being refused access to Italian waters.

This comes at a period of political limbo in Italy, as the premier designate rushes to form a new left-leaning coalition which could alter Salvini's hardline stance on immigrants.

The dozens of migrants on board remained stuck at sea for days until an Italian prosecutor ordered they disembark on the island of Lampedusa.

Spain agreed to take in 15 of those migrants as part of a deal with France, Germany, Portugal and Luxembourg to share out the new arrivals.