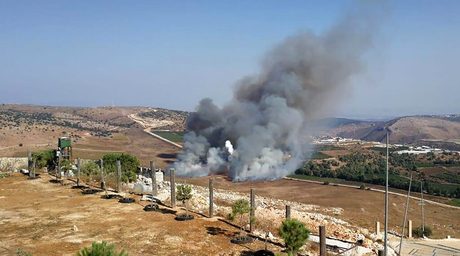 Israeli media reportedly said on Tuesday that Hizbullah has proven capability of targeting positions inside Israel sought to be safe by its army, Israeli Channel 12 said.

“Hizbullah proved capable of firing at roads that were considered safe in northern Israel,” Channel 12 said in the aftermath of Sunday’s Lebanese-Israeli border fire flare.

“The (Israeli) soldiers did not properly plan the route and estimated that they are not exposed to the enemy behind the border,” said the Channel.

On Sunday, Hizbullah said its fighters had "destroyed" a military vehicle on the road to the Avivim barracks in northern Israel, killing or wounding those inside.

Israel's army said it had responded with around 100 artillery shells after Hizbullah fired two or three anti-tank missiles at a battalion headquarters and military ambulance, hitting both.

The Israeli Channel concluded its report saying “the Kornet guided missile fired by Hizbullah has hit the military vehicles and soldiers were luckily saved.”

You know what. Israel needs to eat some humble pie and stop attacking folks outside of its borders. I think it hurts their credibility. I think they are better off having a strong defense and hammering any violations of their border. All of these proactive attacks don't help anyone. HA does not want to attack unless they have to believe me. They know what can happen. Who wants a 10 to 1 kill ratio. At the same time they will not just sit and get picked off. I blame Israel for this round this time.