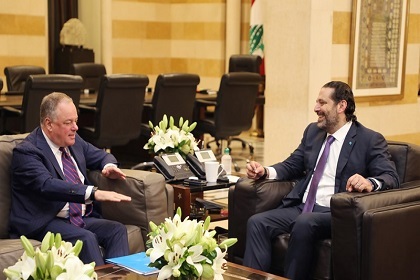 UNIFIL Head of Mission and Force Commander Major-General Stefano Del Col held talks Wednesday with Prime Minister Saad Hariri in Beirut, after which he described Hizbullah’s latest anti-Israel attack as a “gross violation,” stressing that the area south of the Litani River must be free of any weapons other than those of the government.

“I had very useful discussions with the Prime Minister today. I shared my serious concern at the incident of 1 September in UNIFIL area of operations when anti-tank missiles claimed by Hizbullah were fired from southern Lebanon across the Blue Line. This was a serious breach of the cessation of hostilities and a gross violation of U.N. Security Council resolution 1701,” said Del Col after the meeting.

“The missile attack triggered retaliatory shelling by the Israel Defense Forces (Israeli army) and could have led to unwanted escalation of the situation that UNIFIL and the parties might not have been able to control, hence endangering the safety of the local population,” Del Col noted.

He said his priority was to quickly de-escalate the situation and restore calm in the area, which was achieved through “intensive engagement with the parties during the course of the developments.”

“Once again UNIFIL’s liaison and coordination mechanism played a critical role in deconflicting the situation along the Blue Line. At this time, we remain closely engaged with the parties to contain tensions and incidents and enable a safe and secure environment in the area,” Del Col added.

Saying that he was very encouraged by Hariri’s “strong reaffirmation” in the meeting of Lebanon’s continued commitment to the cessation of hostilities under Resolution 1701, the UNIFIL chief said that it is of paramount importance that the area between the Blue Line and the Litani River is “free of any armed personnel, assets and weapons other than those of the Government of Lebanon and UNIFIL.”

He added: “We also agreed on the importance of strengthening the capabilities of the Lebanese Armed Forces (LAF) in the UNIFIL area of operations in order to enable it to take greater security responsibilities along the Blue Line. I assured the Prime Minister of UNIFIL’s continued efforts to this end.”

Hizbullah said its cross-border missile attack on an Israeli military vehicle in the Avivim settlement was aimed at avenging an Israeli strike in Syria that killed two of its members. It has meanwhile vowed a separate response to a drone explosion blamed on Israel that rocked its stronghold in Beirut’s southern suburbs on August 25.

Prime Minister Saado Hariri has earned my utmost respect and captured my wildest imagination for affirming to UNIFIL Head of Mission and Force Commander Major-General Stefano Del Col that Lebanon is in Full compliance with UN Resolution 1701.

Let him dream on

As PM Hariri has repeatedly claimed that Lebanon is in full compliance of Resolution 1701, does this mean that if Israel attacks Hizballah the LAF will do nothing about it. How can such an attack on Hizballah actually be on Lebanese territory if as Hariri claims,as per 1701,. there are no armed forces other than LAF, south of the Litani.