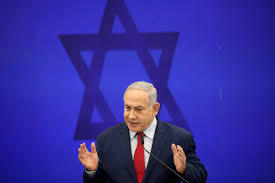 Israeli Prime Minister Benjamin Netanyahu's right-wing Likud party was found Thursday to have violated Facebook's hate-speech policy after a post from his account saying Arabs "want to destroy us all".

Israeli media reported that the post which said Israeli Arabs "want to destroy us all -- women, children and men" appeared on Netanyahu's official Facebook page and was subsequently removed by Likud.

"After careful review of the Likud campaign’s bot activities, we found a violation of our hate speech policy," a Facebook statement said, referring to an automated chat function.

"We also found that the bot was misusing the platform in the time period allowed to contact people. As a result, we temporarily suspended the bot for 24 hours. Should there be any additional violations, we will continue to take appropriate action."

A Likud spokesman told AFP that the freeze went into effect Thursday morning and would not affect the party's online election campaign.

Netanyahu, who is fighting an election battle for his political survival, said the message had nothing to do with him.

"It wasn't me. It was one of the workers at our election headquarters," he told Israeli public radio. "That mistake was fixed quickly."

"Think logically: Do you think I would really write such a thing?"

"I have friends in Arab countries and I have respect for human beings regardless of whether they are Jewish or Arab, Muslim or Christian."

Netanyahu has long faced accusations from critics that he has demonized Israel's 1.4 million Arab citizens with his political rhetoric.

With the September 17 vote looming, he and Likud drew outrage from opposition parties with a push for last-minute legislation that would allow party officials to bring cameras to polling stations.

His critics labelled it a naked attempt to depress turnout among Israel's Arab population, as it could intimidate many into staying away.

Netanyahu has used similar tactics in the past, including warning on election day in 2015 that Israeli Arabs were voting in "droves", a comment for which he later apologized.