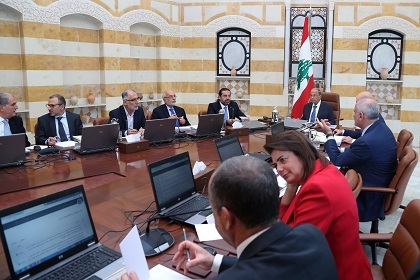 The Cabinet on Thursday approved the long-awaited judicial appointments, amid objections by the Lebanese Forces over the Audit Bureau candidates.

Speaking after a Cabinet session in Baabda, State Minister for Presidency Affairs Salim Jreissati said the Cabinet also formed a ministerial panel to “assess the situations of public institutions ahead of taking the appropriate measures... and restructuring and developing administration.”

Jreissati also said that the Cabinet “took note of the uncontested win of Hassan Ezzeddine in Tyre’s parliamentary by-election” and agreed a national action plan on women, peace and security.

Deputy Prime Minister Ghassan Hasbani meanwhile said the LF objected to the appointments of the Audit Bureau after “the necessary mechanism was not applied in its entirety.”

Interior Minister Raya al-Hassan for her part said she will officially announce the victory of Hizbullah candidate Hassan Ezzeddine in Tyre’s by-election, noting that the Cabinet reached an agreement on setting an October 27 date for municipal by-elections aimed at replacing the dissolved municipal councils.