Blast Outside President Rally in Central Afghanistan Kills at Least 24 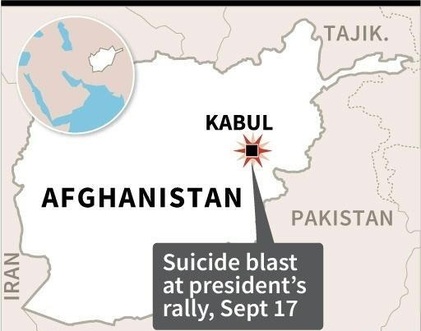 A suicide bomber killed at least 24 people outside a campaign rally for Afghan President Ashraf Ghani Tuesday, less than two weeks ahead of elections which the Taliban have vowed to disrupt.

Interior ministry spokesman Nasrat Rahimi said the bomber had been on a motorbike and had detonated at the first checkpoint leading to the rally. Ghani was unhurt.

The toll emerged as a second blast rocked central Kabul near the US embassy, the latest to hit the Afghan capital, with an interior ministry official stating he would give more details later.

No group has yet claimed either attack.

But the blasts come after US President Donald Trump abruptly ended talks with the Taliban seeking a deal that would have allowed the US to begin withdrawing troops from its longest war.

Trump's declaration that the talks were "dead" spurred the Taliban to declare last week that the only other option was more fighting.

"We had two ways to end occupation in Afghanistan, one was jihad and fighting, the other was talks and negotiations," Taliban spokesman Zabihullah Mujahid told AFP.

"If Trump wants to stop talks, we will take the first way and they will soon regret it."

Presidential elections are scheduled to take place on September 28 with fears mounting that polling booths and rallies will continue to be targeted by insurgents.