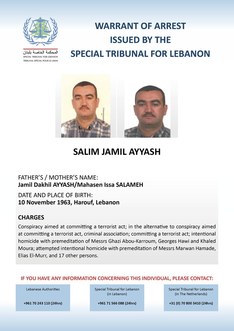 The Special Tribunal for Lebanon (STL) has released an audio-visual and audio public service announcement as well as a poster with the biographical information of suspected Hizbullah operative Salim Jamil Ayyash, who is accused of involvement in the bomb attacks against the Lebanese politicians George Hawi, Marwan Hamadeh and Elias Murr.

“This is part of the STL public advertisement campaign to inform the accused of the need to appear before the Tribunal and to invite the public to submit any information on the whereabouts of the accused to the STL. The poster and messages list the charges against Mr Ayyash and phone numbers at which the public can contact the STL in case they have any information about his whereabouts,” the STL said.

The STL’s Prosecutor has indicted Ayyash for his alleged involvement in the three bomb attacks.

The public advertisement campaign follows the STL President’s finding that reasonable attempts have been made by the Lebanese authorities to effect personal service on the accused in this case, and those efforts have been unsuccessful to date.

“If within 30 days from the advertisement of the indictment on 07 October 2019, the accused is not under the Tribunal’s authority, the Pre-Trial Judge shall ask the Trial Chamber to initiate proceedings in absentia,” the STL said.

A) He is dead
B) He is in Syria or Iran
C) He has another face, and different finger tips... or no fingers at all.
D) He serves tea to his master in the sewer.

It can only be one of the above... but my best bet is he is dead. Ebola got rid of most of'em.

He is around z corner in hay al sulom...

More thank likely is burred in about 10m of concrete somewhere in the eastern desert of Iran.