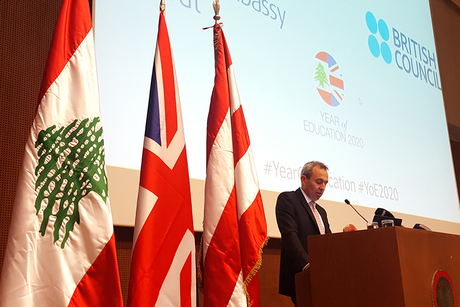 The joint agreement will see the establishment of the first ever in Lebanon computer online delivered IELTS which will make it significantly easier for students to gain necessary English language qualifications, and compete in the global market. More than 10,000 organizations globally trust IELTS, which gives confidence to those taking the test that it is recognized by educational institutions, employers, governments and professional bodies around the world.

The Year of Education 2020 campaign “builds on the UK’s substantive education support to Lebanon, providing over $200 million between 2016 and 2021, placing it amongst the top education donors in Lebanon,” the British embassy said.

“The Year of Education 2020 campaign will see continued work with the Ministry of Education and Higher Education to expand education access, quality and systems. It will support more inclusive education for children with special educational needs, promote Lebanon as an important investment opportunity for UK EdTech firms, and strengthen and expand British-Lebanese university links. The campaign will also better celebrate UK educated Lebanese alumni and increase English language training – including in places outside of the capital – and champion the use of UK qualifications,” the embassy added in a statement.

Following the event, Ambassador Rampling said: “It is a great privilege for us to be here. Thank you to the American University of Beirut for hosting us and for their collaboration with the British Council on the launch of the Computer Delivered IELTS in Beirut. The partnership is not the first with this highly distinguished institution. But it is a great point of pride to me personally that the British Council, with its excellent history in this country, is partnering with one of Lebanon’s top academic institutions.”

“And there is no better way to launch the UK-Lebanon Year of Education 2020 than with you all: Lebanese – and partners of this amazing country – who are determined to build a bright future for Lebanon and for those who live in Lebanon. Because the UK is proud to partner a country that not only values, promotes and prioritizes education, but also a country that has bravely and commendably committed to providing education to all children within the country,” he added.

“Four of the top 10 universities in the world are British. Over a third of Nobel Prize winners who have studied overseas have done so in the UK. The English language is truly the world’s language, and UK qualifications are recognized for their quality and credibility across the globe. As a sign of our education leadership, in the last five years there has been a 90% increase in the number of Lebanese students studying in the UK. Education is not just about schools and universities,” Rampling went on to say.

“And our support goes beyond further. Over 200 Lebanese students have studied in the UK through the prestigious Chevening program and are now part of a wider network of over 50,000 Cheveners around the world. When it comes to training support, over 200 Lebanese Army officers have trained at the UK’s elite military training institutions – some of the very best military establishments in the World. The UK is also proud to have trained 11,000 Lebanese Army soldiers here in Lebanon, along with training programs for the Internal Security Forces. And we continue to work closely with the Ministry of Education and Higher Education to support quality formal, non-formal and inclusive education to all children across Lebanon,” Rampling said.

“Today’s ceremony is a symbolic event that reveals the level of excellence that we at the Ministry of Education and Higher Education are trying to reach, with the support of our true friends, namely the British Government and the American University of Beirut (AUB), along with the cultural, educational and technological renowned institutions. It is an occasion for us to express our pride of these friendships and fruitful relations, and to express our gratitude to the British and American sides, particularly that the UK is among the leading donors to Lebanon in the educational sector for Lebanese and non-Lebanese,” Shehayyeb added.

AUB Provost Dr. Mohammed Harajli said: “We look forward to seeing the impact of this Year of Education being celebrated by the British embassy in Lebanon, with events that will highlight and expand the great work that the UK in Lebanon and the British Council are in this country and the region. We are the American University of Beirut and we all know that America and Britain have a ‘special relationship’ in the world, and we are happy to carry that on between our two organizations.”