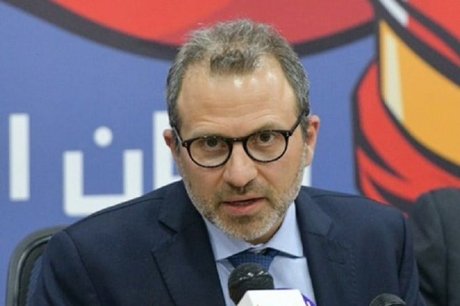 Free Patriotic Movement chief Jebran Bassil on Tuesday called for a “unified response” to the latest dollar shortage crisis in the country, as he slammed what he described as attacks on “the President’s dignity.”

“Lebanon is facing an economic conspiracy but this does not absolve us of our responsibilities, because we have allowed our economy and finances to be this weak in the face of any sanctions, rumors or protests,” Bassil said after the weekly meeting of the Strong Lebanon parliamentary bloc.

“There should be a unified response from us all to what has recently happened regarding the dollar,” he added.

Noting that reform should be “comprehensive” and should target “politicians and their privileges in the state” before targeting citizens, Bassil said banks and financial markets “should realize that something new is happening in the Lebanese State and should lower their interests.”

Referring to the rally that the FPM will organize in Hadath to commemorate the “October 13 anniversary”, Bassil called on FPMers to turn out heavily to reject “insults against the President’s dignity.”

“We will hold a central rally on Baabda’s gates on October 13 to tell everyone who we are,” Bassil said.

President Michel Aoun served as the head of one of two rival governments contending for power in Lebanon from 1988 to October 1990, in his capacity as army commander.

Rhetorical question, is it possible to attack something which doesn’t exist? I’m referring to dignity.

I mean, if one drinks alcohol once, he becomes alcoholic. If one steals something, he becomes a thief. I guess that if one runs away once he’s also a runaway for life. Am I wrong ?

The face of corruption and dishonesty. US sanctions are coming to this iranian stooge.

Seems like hes having an identity crises he does not who he is anymore.
“We will hold a central rally on Baabda’s gates on October 13 to tell everyone who we are,” Bassil said.

"Lebanon is facing an economic conspiracy"

This is what you claim when you fail!

This is the same guy who spent a month in the US and didn't even get a meeting with a single member of the US State Dept--he is still mad about that as it is has never happened to anyone before.

Little john,
Your village just called they are missing their idiot please leave the AM-PM station now and head back....