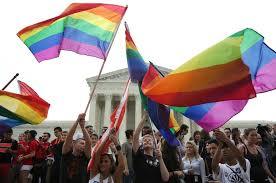 The top U.S. court on Tuesday began hearing arguments on whether employers have the right to sack workers because they are gay or transgender, an issue which has caused deep divisions in US society.

About 100 LGBTQ activists chanted outside the Supreme Court building before arguments were to begin on the first day of the court's new session.

One woman wore a clerical collar and held a sign reading: "My faith does not discriminate."

The Trump administration has effectively thrown in its lot with employers, backing a narrow interpretation of a 1964 civil rights law banning discrimination "on the basis of sex."

"Sex refers to whether you were born woman or man, not your sexual orientation or gender identity," argued Solicitor General Noel Francisco. He said it is the job of Congress to update the law, not the justice system.

But advocates for sexual minority groups argue that the rights of the LGBTQ community have advanced first and foremost through the court system in recent years, most notably with the Supreme Court's landmark 2015 decision to legalize same-sex marriage.

"I think it's time for the administration just to back off," Karen Holmes, 62, who transitioned to a woman after military service, said outside the marble-columned court building.

Amanda, 30, who did not want to give her last name, said discrimination in the workplace is a major problem.

"And it's a really important moment for the court to show that equality doesn't just stay inside the household. It's part of our society."

Max, 19, also among those gathered outside the court, said he felt there had been progress against LGBTQ discrimination during his childhood "and now it feels like we're starting to inch backward."

Ria Tabacco Mar of the powerful American Civil Liberties Union (ACLU) said that "in many ways, this is more fundamental than what was at stake" in the same-sex marriage case of 2015.

Only 22 states forbid discrimination against sexual minorities in the workplace.

The Supreme Court will start by hearing the cases of Donald Zarda and Gerald Lynn Bostock.

The former, a skydiving instructor from New York, was sacked after jokingly reassuring a female client whom he was strapping to himself for a jump that he was gay. He died in a base-jumping accident in 2014, but his family have pursued the case.

The second case is of a social worker from Georgia who was sacked shortly after joining a gay sports team.

Zarda's dismissal was overturned by a court while Bostock's was upheld, and the difference in interpretation of the law prompted the intervention by the Supreme Court.

The court's nine justices will then examine the case, for the first time in public, of a transgender person.

Born a boy 58 years ago, Aimee Stephens worked for a Detroit funeral home for six years before telling her employer she wanted to be issued a female uniform. Two weeks later, she was fired by her boss, Thomas Rost, who said: "This is not going to work."

In defending his decision, Rost cited his Christian values and the need to avoid upsetting customers in mourning.

Since its decision on gay marriage, the court has swung to the right with Trump's appointment of two conservative judges, Neil Gorsuch and Brett Kavanaugh.

For Tom Goldstein, a lawyer who has often argued cases at the Supreme Court, Stephens' case has probably come "too early" before the body, which is unlikely to accept a broader reading of the 1964 law.

"In 20 years, I think it's going to be pretty inconceivable socially, that we will think that the discrimination against gays and lesbians and transgender individuals is legal," he said.