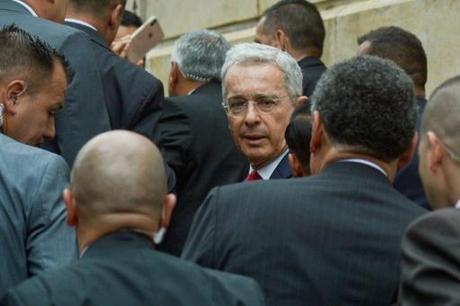 Colombia's popular and influential former president Alvaro Uribe, who is facing a judicial investigation over witness tampering, appeared Tuesday before the country's Supreme Court, which will decide whether or not it will try the former leader.

It was the first time an ex-president has appeared before Columbia's highest court.

In 2012, right-wing Uribe filed a complaint against leftist senator Ivan Cepeda, who Uribe says hatched a plot to falsely link him to paramilitary groups.

But now the court has instead opened a witness tampering investigation into 67-year-old Uribe, who is now a senator and the leader of current President Ivan Duque's Democratic Center party.

Uribe, whose efforts to stand up to far-left guerrillas in Colombia are both applauded and criticized, arrived at the court Tuesday morning flanked by a large security force.

Supporters and opponents gathered in front of the building from the early hours of the morning before the proceedings, which were held behind closed doors, began.

"It is so hurtful to me that they called an investigation," Uribe said after the hearing, claiming that accusations that he tampered with witnesses are "against all logic."

If the court decides on a trial, he could spend up to eight years in prison, and could also face pre-trial detention.

The decision is expected to take several days.

"No pressure, demonstration or public protest will influence the decisions that the judges are obligated to make," he said.