Berri from Baabda: Emergency Panel to Meet if No Budget Next Week 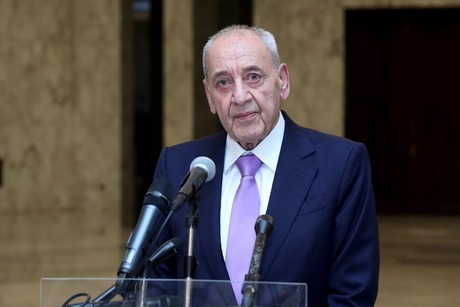 Parliament Speaker Nabih Berri announced Thursday that he agreed with President Michel Aoun to convene the so-called “emergency committee” that was formed in the September 2 economic meeting in Baabda should the approval of the 2020 state budget be delayed beyond next week.

“I was honored to meet the President, and the session was more than good, rather excellent, and it tackled all the current topics, especially the monetary and financial issue and the issue of the state budget, in addition to the events in the South and in the region,” Berri said after the talks.

The Speaker also confirmed that a parliamentary session to interpret Article 95 of the Constitution – at President Aoun’s request – will be held on time on October 17.

What will be his next visit after meeting the puppet, will he go see his Damascus based puppeteer ?

I predict that ninety five percent of the people of Lebanon regard it as part of Syria. France carved it off. Voila.