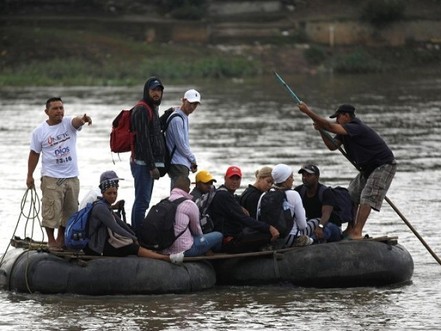 The boat was traveling off the southern border state of Chiapas when it listed to one side, pitching its occupants into the water, the state prosecutor's office said in a statement.

A 39-year-old man was found dead, it added, washed up on the shore. A second body was later located a few hundred metres from the first.

All were from Cameroon, a country that has seen a growing exodus of refugees amid an increasingly violent conflict between its French- and English-speaking communities.

Chiapas is a main crossroads for migrants crossing Mexico toward the United States. They are mostly Central Americans, but in recent years there has been an increasing number of Africans, who often fly to South America and then make long treks overland and by boat.

African migrants in Chiapas regularly stage protests demanding the Mexican authorities allow them to continue their journey toward the United States.

Undocumented migrants regularly use boats to evade the authorities in southern Mexico, where the government has deployed 6,000 National Guardsmen to tighten the border.

The move is part of its efforts to crack down on irregular migration under a deal to avoid US President Donald Trump's threat to impose steep tariffs on Mexican goods.

Under the deal, the Mexican government has deployed another 15,000 National Guardsmen along its northern border and accepted the return of more than 50,000 migrants seeking asylum in the US, who must now wait in Mexico while their claims are processed.