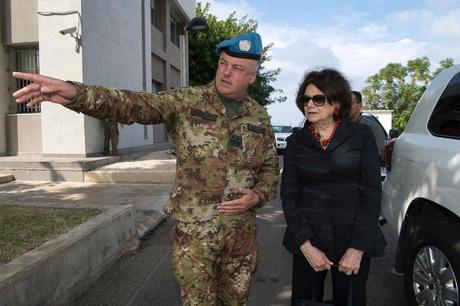 The United Nations Under-Secretary-General for Political and Peacebuilding Affairs, Rosemary DiCarlo, paid a visit Friday to the UNIFIL Headquarters in Naqoura, south Lebanon, and toured the Mission’s area of operations in order to see first-hand the work of UNIFIL in maintaining the cessation of hostilities and calm along the Blue Line, a UN press release said Saturday.

In Naqoura, UNIFIL Head of Mission and Force Commander Major General Stefano Del Col briefed the UN’s political and peacebuilding chief on the work of the Mission and the security situation in the area of operation. He emphasized the critical role played by the Mission – especially through its liaison and coordination channels – in containing recent tensions and incidents along the Blue Line, which otherwise could have developed into a dangerous escalation.

Maj. Gen. Del Col also emphasized the engagement with and continued cooperation of the parties in the implementation of UN Security Council resolution 1701, which forms the core of UNIFIL’s mandate.

During the meeting, they also discussed the work carried out by the Mission with the local population, municipalities as well as the numerous initiatives aimed at enhancing cooperation in women’s and youth empowerment in south Lebanon. Since 2006, UNIFIL has undertaken several thousand CIMIC (Civil-Military Co-operation) and Quick Impact Projects to improve the living conditions of the people of south Lebanon and has provided free medical, dental, veterinary assistance in large numbers.

While in south Lebanon – her last stop in the weeklong tour of the wider Middle East region – Ms. DiCarlo also conducted an aerial tour of the Blue Line, which lies at the centre of gravity of UNIFIL’s overall mandate implementation.

"Peace-building."
The UN is worn out. It has been replaced.