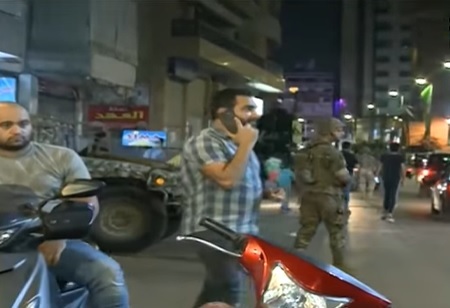 Security forces went on alert overnight in two areas in the capital and its southern suburbs after an “Israeli drone” was heard hovering, media reports said.

“This prompted the encirclement of the area by the headquarters’ guards, as ISF Intelligence Branch members deployed heavily in a bid to down the aircraft out of fear that it could be carrying explosive material,” MTV said, adding that the drone left the area after a while.

Al-Jadeed television had reported overnight that an Israeli surveillance drone had been detected over Beirut’s southern suburbs, which are a Hizbullah stronghold.

“The sounds of this aircraft can be clearly heard,” al-Jadeed’s correspondent to the area said in a live message.

“Lebanese Army troops deployed on the rooftops of buildings in the Mouawad neighborhood to deal with any hostile target,” al-Jadeed said.

The Lebanese Army later issued a statement that clarified what happened.

"An Israeli reconnaissance drone flew at low altitude over the Madi neighborhood of the Mouawad area in the southern suburbs for some time before increasing its altitude and eventually leaving Lebanese airspace," the statement said.

"Army units deployed in the region took the appropriate measures," it added.

“The sounds of this aircraft can be clearly heard,”
I admit knowing nothing about aviation and drones in particular, but how on earth by clearly hearing can the security forces claim that the drone was Israeli?

Dude.. it was humming.. Hava Nagila..