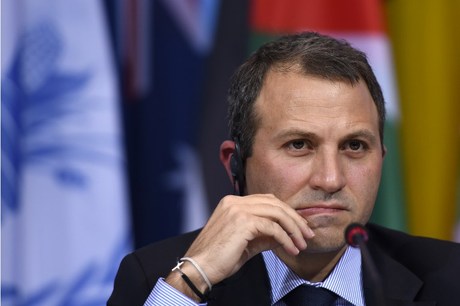 Remarks by Foreign Minisrer Jebran Bassil about ending the suspension of Syria’s membership of the Arab League have drawn disapproving responses in Lebanon.

Prime Minister Saad Hariri’s adviser Nadim al-Munla told al-Jadeed TV that Bassil’s remarks had not been coordinated with the premier and “do not reflect Lebanon’s stance.”

Hariri's press office later issued a statement emphasizing "Lebanon's commitment to the requirements of Arab consensus regarding the Syrian crisis, most recently of which the statement issued by the latest meeting in Cairo."

"The Government's ministerial statement did not tackle the issue of Syria's return to the Arab League, while reaffirming adherence to the disassociation policy and non-interference in the Arab affairs," the statement added.

"The Government's stance on the recent military developments on the Turkish-Syrian border is expressed in the statement issued by the Ministry of Foreign Affairs and not in any other stances," it said.

“Instead of calling for Syria’s return to the Arab League, we should demand guarantees for the protection of the aggrieved Syrian people,” the MP said.

“They rather aggravate the internal rift and plunge the country into foreign conflicts,” she said.

Bassil said during the Arab meeting that Syria’s return to the League would represent “the first response against the Turkish aggression against the Arab Syrian land” and so that “northern Syria does not get lost the same as the Syrian Golan.”

“We are not gathering today against Turkey, but for the sake of Syria in its absence,” Bassil said.

These were the orders given by his master in Dahyiah the night before and like a good servant, he just obliged.

Syria will be rebuilt by those who destroyed it, or at least they will manage to get a biggest chunk of the whole deal.