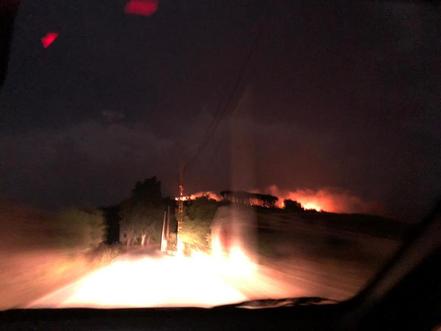 A wildfire was raging in the Chouf district of Meshref with reports saying it could engulf nearby houses and educational facilities if not contained.

Civil Defense firefighters and Lebanese army teams battled the large blaze, as the weather recorded above the average temperature level for October.

The fire has reportedly besieged several houses in the town.

The National News Agency said the blaze has spread over thousands of meters connected to a number of residential buildings and to the Rafik Hariri University.

Some said the fire blazed near another educational facility in the area.

Last night, a large fire broke in the outskirts of the town of Saffariya in Jezzine region and in Akkar.