Aoun at Levantine Gathering: We Shall Not Let Anyone Steal Lebanon’s Identity 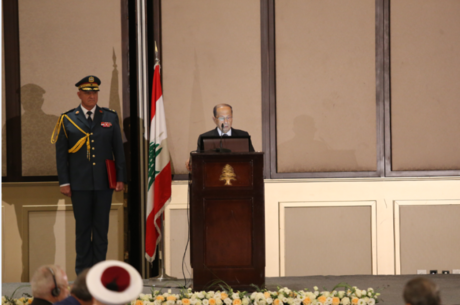 President Michel Aoun said on Monday that officials disagree in politics in Lebanon and the heat of debate intensifies, but that “does not affect freedom of belief, freedom of faith or the right of difference."

At the first annual Levantine Gathering held at the Hilton - Habtoor Hotel, Aoun said that Lebanon embodies a pluralistic diversity and its role and mission must remain a land of convergence and dialogue, rejecting all forms of intellectual and religious extremism.

He said the Levant is battering internal “spring” conflicts that tore our societies in addition to destructive terrorist wars that left hundreds of thousands of victims and displaced people, adding to economic wars that brought growth to a halt and weakened production.

He said Israel is flagrantly violating international laws and seeks to impose a new fait accompli, “starting with the Judaization of Jerusalem, the policy of settlement and racial legislation, inviolability of recognized international borders, support for the annexation of territories occupied by force such as the Golan Heights...these are dangerous indicators,” said Aoun.

He pointed out to malicious schemes to “fragment the Levant” at sectarian, ethnic and geographic levels in line with what is drawn for the region as part of the deal of the century.

He said spreading the concept of Islamophobia is a major part of this war, and the Takfiri principle is the other part. “Shall we let these conflicts sweep us away or shall we resist them?” he asked.

Aoun concluded that our role as Levantines is to develop a new culture that refutes all that is said or written about the clash of religions and civilizations because there is ONE multicultural human civilization; and the Levant which had exported religious thought to the world cannot allow being turned into a small isolated area.

what a joke.. embarrassing to see this old corrupt destroy the Christians for the again and again...

What Lebanese Identity? You are all sectarian. No on talk of Lebanon . Everyone is about their own sect. Spare me the BS.

Dudes.. **DISCLAIMER**.. not a twig was harmed in the making of that little brown mini podium.. Also does having SSNP ministers.. MPs.. and members of ones own Lebanese nationalist party's politburo.. promote the Lebanese identity?..

As if Golan, Jerusalem, or Palestine were our priorities now...
Despicable!
This speech is ridiculous... and so is this man...

Jerusalem, Golan and israeli settlements in West Bank is the least of Lebanons worries right now. "Its the economy, stupid!"