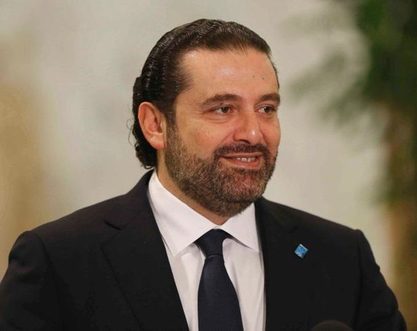 Prime Minister Saad Hariri replied on Monday to the controversial remarks of Free Patriotic Movement leader and Foreign Minister Jebran Bassil about his intention to visit Syria in order “to repatriate the Syrian refugees.”

Hariri said the 2005 martyrdom of his slain father, ex-PM Rafik Hariri was what made possible the ousting of the Syrian army from Lebanon.

“The blood of PM Rafik Hariri made the return of the Syrian army to Syria possible,” Hariri’s press office said in a statement.

“If the Free Patriotic Movement leader wants to go to Syria to discuss the return of Syrian refugees, that’s his business...the outcome is what matters, and the Syrian regime must not take this visit as a pretext to return to Lebanon because we do not trust the regimes’ intentions regarding the refugees’ return,” the statement added.

“Lebanon has enough debates to worry about, my main concern is how to stop the economic crisis. If not, the table will alone turn against everyone's heads,” said the statement quoting the PM.

On Sunday, Bassil told an FPM rally that he plans to visit Syria to “secure the return of Syrian refugees.” A position highly defied by several parties in Lebanon including al-Mustaqbal Movement of Hariri, the Lebanese Forces and Progressive Socialist Party who defy normalization of ties with Syria.

Moreover, at the Arab League, Bassil called for ending the suspension of Syria’s membership of the Arab League. His position has drawn disapproving responses from parties that oppose normalizing ties with the Syrian regime.

"If not, the table will alone turn against everyone's heads,” said the statement quoting the PM.

Oh, I remember how the table used to crumble and turn on our heads when we were in Seychelles together.

Sad but True... Hariri - you have become the biggest let down among all the failures our government houses..

You talk the talk but truly you run away from the walk..
You're a coward and a sell out.. and corrupt, and desperate.. pathetic!

to clear to other readers... I feel let down by Hariri and he is as bad as Basil
Just a different version.. nothing better or less

yeah, unlike your nassrallah who does not adopt the 'look style of his Bosses in Iran'?

Dude.. libanaisresilient.. you're obviously not anywhere near Lebanon.. 'cause.. and FYI.. sporting full beards had spread like wildfires.. among the Lebanese politicians.. as of late.. not sure about the reason for that newly acquired hairiness... It's gotten so bad.. I got worried ministers.. Raya al-Hassan.. Nada Boustani ..Violette Safadi.. and May Chidiac.. were going to sprout themselves.. ZZ-top sized ones...