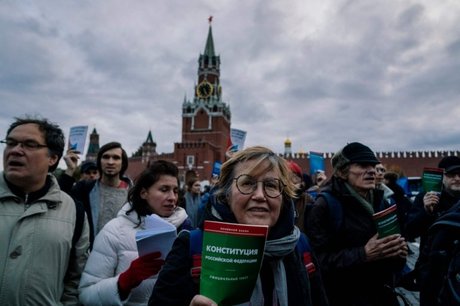 Russian investigators said Monday they had detained four more people suspected of violence against police at an unauthorized opposition protest in July, as a court confirmed the conviction of another.

Moscow City Court upheld the conviction of protester Konstantin Kotov, a computer programmer, who had been jailed for four years for repeatedly violating protest laws, a spokesman said.

Separately, the powerful Investigative Committee said it had detained four suspects and searched their homes while two other suspects had fled.

The latest detentions relate to the summer protests when tens of thousands of people, many supporters of opposition leader Alexei Navalny, took to the streets of Moscow demanding fair elections.

Authorities unleashed a crackdown on the rallies, sentencing several people to jail terms of between two and five years. One protester's jail term was later reduced to a suspended sentence.

Investigators said two of the four detained on Monday, Yegor Lesnykh and Maksim Martintsov, had knocked a National Guard officer to the ground during a July 27 protest, and that Lesnykh had kicked another.

The men are set to be charged shortly, after which a court will decide whether to keep them in custody, the Investigative Committee said.

Two others had "concealed themselves after learning of the investigators' activities", the committee added.

Earlier, a news website that focuses on opposition detentions, Mediazona, reported that another man, activist Denni Kulinich, had been taken by investigators for questioning.

Pro-Kremlin television channel Ren-TV had named Kulinich as a "coordinator" of the protest.