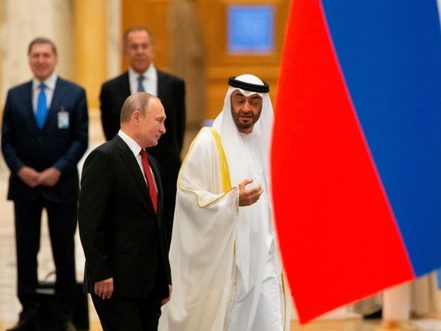 Russian President Vladimir Putin signed deals worth over $1.3 billion with the United Arab Emirates on Tuesday, wrapping up a tour of the Gulf where he also courted investment in Saudi Arabia.

"You will not be disappointed by your Russian partners," Putin said.

The pair struck six agreements, including one on shared investments between Russia's sovereign wealth fund and the Emirati investment fund Mubadala.

Deals worth more than $1.3 billion, notably in the energy, advanced technology and health sectors, were tabled during Putin's visit, according to the Russian Direct Investment Fund (RDIF).

"This historic visit reflects the strength of UAE-Russia relations, which we will continue to jointly promote at all levels for the mutual benefit of our nations," Abu Dhabi's crown prince tweeted.

In 2018, commerce between the two countries tabled some $1.7 billion.

"Among the Gulf countries, the UAE is the leader in terms of trade with Russia," Kremlin adviser Yuri Ushakov told reporters ahead of the Gulf tour.

As Putin made his way to the presidential palace, jets painted the sky white, blue and red -- the colors of the Russian flag -- and cannons fired a ceremonial salute.

The streets of Abu Dhabi were lined with Emirati and Russian flags, while road signs that usually display traffic warnings instead greeted Putin in Arabic and Russian.

Mansoori came back to earth in early October after his eight-day mission, returning home last week to a hero's welcome.

"We are ready to continue providing all the necessary assistance to the United Arab Emirates in the space sector," Putin told Sheikh Mohammed, according to a statement.

Kirill Dmitriev, CEO of the Russian Direct Investment Fund, played up the two countries' "partnerships on Earth, but also in space", adding that the potential for cooperation was "unlimited."

The first Arab in space was Saudi Arabia's Sultan bin Salman Al-Saud, who flew on a U.S. shuttle mission in 1985, followed by Syrian air force pilot Muhammed Faris, who spent a week on the Soviet Union's Mir space station in 1987.

Putin's Monday visit to traditional US ally Riyadh, where he signed deals worth billions of dollars, came amid efforts to calm soaring tensions between the Gulf monarchy and its arch-rival Iran.

Despite its alliance with Tehran, Moscow has improved ties with Riyadh in recent years, hosting King Salman on the first official trip to Russia by a Saudi monarch in October 2017.

After a series of incidents in the Gulf that raised fears of a regional conflict between Saudi Arabia and Iran, Russian political analyst Fyodor Lukyanov said Russia could "play the role of peacemaker."