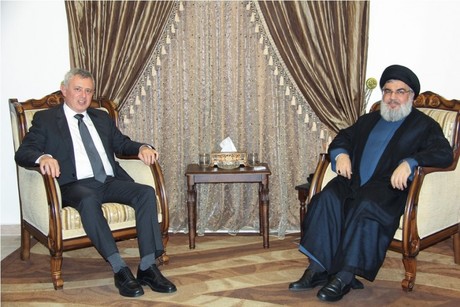 “The meeting witnessed a thorough and comprehensive discussion of the various regional developments, especially the latest developments in the Iraqi and Syrian arenas,” a Hizbullah statement said.

“As the two parties reiterate their known stance on the need to restore normalcy in the Lebanese-Syrian relations, they renew their emphasis on the need for direct and official dialogue with the Syrian government, especially in two key fields,” the statement added.

The two important domains, the statement said, are “benefitting from the huge chance created by the reopening of the al-Boukamal border crossing to boost Lebanese exports to Iraq via Syria, and working together with the Syrian government on the issue of returning Syrian refugees to their country” in order to “alleviate the vast economic and social burdens on Lebanon.”

Nasrallah and Franjieh also tackled the economic situations in Lebanon in a “detailed manner” and called for “exerting efforts to increase revenues and slash expenses, while taking into consideration the legitimate demands of low-income citizens.”

The two men also rejected any tax hike and called on the government to “put great emphasis on the revenues that the seaside properties can generate and be strict in fighting corruption and the waste of public funds.”

They also called for “preserving financial and monetary stability,” describing it as “one of the pillars of security and political stability in the country.”

Excellent. That is exactly what these meeting with these 2 is all about. Hassan Nasrallah and his Hizbos is the defecto rulers of the pathetic banana republic of Lebanon. They used to go to Damascus to get th blessing, now they just to to the police state within a state know as Dahyeh to get the blessing. What a shame.