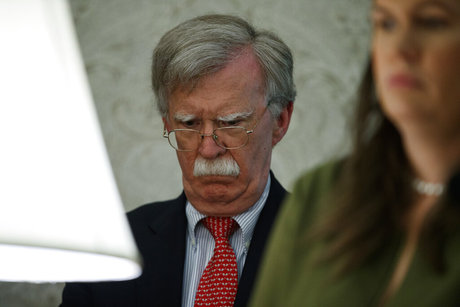 The White House's former national security adviser John Bolton was so alarmed by efforts to pressure Ukraine that he called it a "drug deal," his former aide told lawmakers, according to US media.

Bolton warned that President Donald Trump's personal attorney Rudy Giuliani, who is reportedly under federal investigation over his dealings with Ukraine on the president's behalf, is "a hand grenade who's going to blow everyone up," Fiona Hill testified, according to The New York Times.

"I am not part of whatever drug deal Rudy and Mulvaney are cooking up," Hill reported Bolton as saying, according to the Times, which cited two sources familiar with her closed-door deposition.

Mick Mulvaney is the acting White House chief of staff.

They have demanded documents tied to Trump's withholding of that aid, which was desperately needed by Kiev in its ongoing conflict with Moscow. Russia annexed Crimea in 2014 and supports separatists in eastern Ukraine.

Hill, Trump's former top Russia adviser, made the remarks during a 10-hour deposition before U.S. lawmakers probing whether to impeach the president. AFP has not independently verified the report.

Bolton instructed Hill to notify a National Security Council lawyer, according to the Times, after a "sharp exchange" with US ambassador to the European Union Gordon Sondland, who was working with Giuliani on the alleged pressure campaign.

Giuliani, a former federal prosecutor and ex-mayor of New York City, has acknowledged that he and two associates worked with Ukrainian prosecutors to collect information on Biden, his son Hunter and the US ambassador to Ukraine Marie Yovanovitch, who was recalled in May.

Hill's testimony came after Trump pushed Ukrainian President Volodymyr Zelensky to investigate the Bidens in a July 25 phone call, which sparked the impeachment inquiry by the House of Representatives.

A rough transcript of the call shows the two leaders discussed Zelensky's desire to receive the military aid. Trump then responded that "I would like you to do us a favor though," and later brought up Biden.

"I don't know Fiona and can't figure out what she is talking about," Giuliani said in reaction to Hill's testimony, according to The Washington Post.

He said the State Department had arranged all his contacts with Ukraine, the Post reported.

Trump fired Bolton -- known as a foreign policy hawk -- in September. Hill left the administration shortly before the July call with Zelensky.