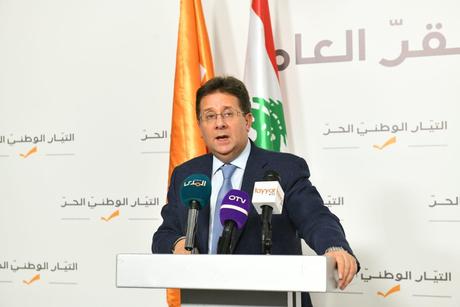 The Strong Lebanon parliamentary bloc on Tuesday noted that it does not want to “turn the tables” on political rivals in the country but rather on corruption and the financial and economic situation.

“When we say that we want to turn the tables we don't mean that we will turn them against anyone but rather on the financial and economic situations,” bloc secretary MP Ibrahim Kanaan said after a weekly meeting, clarifying recent remarks by the head of the bloc – FPM chief MP Jebran Bassil.

Defending Bassil’s remarks on Syria at the Arab League, Kanaan said: “What we witnessed on the Syrian-Turkish border was an attack on Syrian sovereignty, and even Syria’s fiercest enemies condemned what happened, so why should there be an inferiority complex if we defend Lebanon’s interests and take a stance that serves our interest?”

As for Bassil’s remarks on visiting Syria, Kanaan said “the Syrian refugee presence in Lebanon has created financial, economic, social and security burdens and the previous initiatives have not led to a result.”

“Talking to Syria for the sake of the national interest and Lebanese sovereignty and for the sake of achieving stability should not create an inferiority complex, seeing as we are capable of dealing with all countries and remaining Lebanese,” the MP added.