ISF Says Beaten Man in Video Not Involved in Wildfires 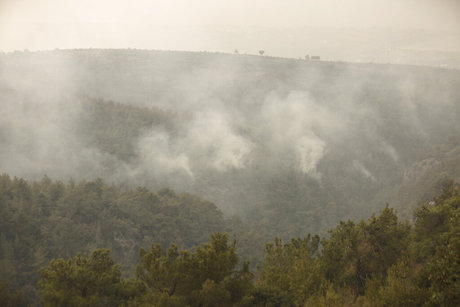 The Internal Security Forces on Wednesday denied reports claiming that an arson suspect was arrested Tuesday in connection with the massive wildfires that engulfed the country.

“A video showing a municipal policeman beating up a person has been circulated on social media and reports said that the beaten person was setting up fires,” the ISF said in a statement.

“After an investigation was carried out by the Brummana police station, it turned out that Syrian national H.M., who works at a construction site in the Metn town of Baabdat, had burned garbage consisting of nylon bags, paper and carton in the site’s vicinity, after the constriction site’s owner asked him to get rid of the material,” the ISF said in a statement.

“Municipal police arrived on the site and the flames were doused,” the ISF added, noting that “two policemen beat up the worker after he tried to escape.”

“H.M. was arrested for burning trash and entering the country illegally, as the two municipal policemen were released on bail at the request of the competent judicial authorities,” the ISF said.