Brexit Talks Progressing but 'Still Not at Goal', Says Merkel 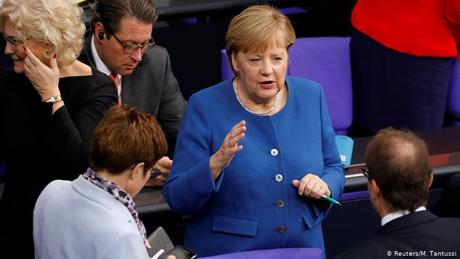 German Chancellor Angela Merkel said Thursday that Brexit talks with London were heading in a positive direction, but stressed that the two sides had yet to reach a deal.

Negotiations are "progressing but still not at the goal," Merkel told German MPs hours before a crunch summit in Brussels to secure an accord before the October 31 deadline for Britain to leave the EU.

She noted that London had "shown readiness to negotiate, including by putting very concrete proposals on the table".

But Merkel said she could not give a prognosis on how talks in Brussels starting later Thursday would end.

Underlining the difficulty of securing a deal, she said that "finding a good solution is like squaring the circle".

She insisted that the remaining EU 27 member states would not allow a "hard border that could inflame hate and violence again" to return to the frontier separating Ireland and Northern Ireland.