Protesters Take to Streets across Lebanon over Planned Taxes 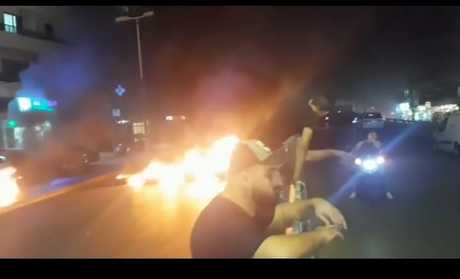 Protesters took to the streets and blocked key roads across Lebanon on Thursday evening over the government’s inclination to impose new taxes, especially a tax on voice calls via internet apps.

The protests first started at downtown Beirut’s Riad al-Solh Square following calls on social media before spreading to nearby areas and eventually to regions outside Beirut.

The demonstrators blocked roads in Beirut’s Riad al-Solh, Saifi and Ring areas before heading to several streets in the capital.

“The people want the downfall of the regime,” the protesters chanted in downtown Beirut.

Telecommunications Minister Mohammed Choucair for his part said that, at the request of Prime Minister Saad Hariri, he has decided to reverse the decision to slap taxes on calls via internet apps, while noting that Cabinet had unanimously approved the move.

Civil society groups including the You Stink movement which spearheaded the 2015 protests took part in the demos.

The protests in central Beirut involved an incident with the convoy of Education Minister Akram Shehayyeb. Protesters said the minister’s bodyguards opened fire in the air as the convoy was passing in the area.

"We elected them and we will remove them from power," one protester told a local TV station.

Public anger has simmered since parliament passed an austerity budget in July, with the aim of trimming the country's ballooning deficit.

The government is assessing a series of further belt-tightening measures it hopes will rescue the country's ailing economy and secure $11 billion in aid pledged by international donors last year.

And it is expected to announce a series of additional tax hikes in the coming months as part of next year's budget.

On Wednesday, the government approved tax hikes on tobacco products.

Growth in Lebanon has plummeted in the wake of repeated political deadlocks in recent years, compounded by the impact of eight years of war in neighboring Syria.

Understand where you're coming from and agree that Lebanese in general do our best to avoid paying taxes, partly because the ruling class pockets most of it.

Popular anger over conditions needs something to coalesce its expression by the people.
Maybe, just maybe, this is the beginning of something similar to March 14 where we collectively expressed our anger at being controlled by an external entity.

I think that people are just fed up! They will take the streets eventually, like they did on february 14th... all together... and united... It will buid up... it will happen... Enough is enough! Protests are not stupid. How do you dare say this leb first?
In many countries protests are forbidden, or punished with blood. We still have this freedom, this weapon, and it must be used!

Indeed it must, in a civilized manner as @SOS stressed, if change is to happen.

We Lebanese can compete with any nation in any field if we have stable political and economic systems that allows us to compete on the bases of ability instead of political affiliation.

Don't know who came up with the idea of taxing WhatsApp? Besides the fact that it is illegal, people will find other applications and messengers to communicate with.

Maybe, and every fire needs a trigger - No?